The problem with assessing any league season which also involves a ton of cup football is the sheer noise. Whether or not you think that Liverpool’s 84 points in 2013/14, or Leicester’s title in 2015/16, were “due” to not playing many cup games, the fact is that the lack of additional fixtures leaves an uncluttered picture, and is therefore easier to assess.

In other words, we don’t have to work out the role cup football played in those two examples of big, unexpected league overachievement, because cup games were not even part of the equation.

We therefore need to remove some of the noise to get to the truth.

We know – as it’s a fact – that a team’s chances of winning a game decreases if they have less time to rest up and prepare than their opponents. Shy and retiring football fitness man Raymond Verheijen doesn’t like to mention it, but his study of 27,000 matches showed that:

So if you play 25 cup games, and 14 of those are on a Thursday (and seven of those involve travel overseas), you can obviously expect some impact on league form in games that followed. It seems logical, and the research backs it up.

Lots of cup games also usually means cramming league games into the schedule later in the campaign due to cancellations, which only adds to the mess. 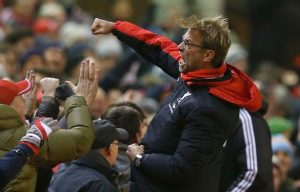 Last year I also looked at cup runs over the Premier League era, and how they affected league form. On average it definitely cost clubs points and places, especially to those with smaller squads – of which I’d include Liverpool right now, certainly in comparison to the Champions League regulars.

Now, we can argue all day long about the wisdom of going hard at the cups in the first place. But briefly, I think Jürgen Klopp’s attitude was absolutely spot-on: play weaker XIs in the earlier rounds, and then, if progress was made, go with the best players.

A chance to play in a Wembley final (and try to win a trophy, however minor) was a good experience for his team, so Stoke had to be taken seriously in the League Cup semi-finals in a way that Bournemouth, in an earlier round, didn’t have to be. And by the time the Europa League knockout stage was around, Liverpool were certainly not going to win the league, and were only outsiders for the top four. So at that stage of the season Klopp rightly eschewed the FA Cup, given that a third cup run would have been unmanageable, and possibly even suicidal. So he rested key players in the four games against Exeter and West Ham, but was still fielding strong XIs in the Premier League in early 2016, albeit with some key names out injured.

Then, when the top four was too distant, but the Europa League – not just representing a trophy, but Champions League qualification – was suddenly just a few wins away, he started resting players domestically.

This is exactly what Rafa Benítez did every season – back in the days of regular c.60-game campaigns (a period which remains the high-water mark of the Reds in the Premier League era); except that back then the lost prize was usually winning the title, but continued progress in the Champions League made Europe the obvious priority. Around March, Rafa used to weigh up his options: in 2005, 2007 and 2008, Europe was the better bet; in 2006 and 2009, the focus was domestic. No matter what a manager sets out to win, there comes a time – usually early spring – where he has to prioritise. Sometimes managers talk of quadruples, but they can often see all their hopes dashed in the springtime fixture jam: a period where not only is fatigue starting to set in after six or seven months of the season, and following a tough winter league schedule, but a time when European games start up again.

So Klopp did everything I’d expect (and indeed, everything I hoped he would). But the sheer number of games – coming thick and fast – and the changes to the XIs, made it hard to get a sense of linear progress; with some people apparently unable to see beyond the weakened teams and, say, a bit of a stuffing at Swansea, or a drab draw at the Hawthorns. It’s not progress, they huffed, unable to see the bigger picture. Who, at that point, wanted Klopp to focus on his league points-per-game and give up on silverware?

So, with this in mind, I thought I’d devise some unique analytical ways of assessing the season, starting from the point that Klopp took over.

For me, key things to look at were:

First, we need to remember that Klopp inherited a team in mid-table, and comparing the 1.6 league points per game under the German with the 1.5 under Rodgers is utterly erroneous; and briefly, here’s why. First, Rodgers was in his 4th season, and knew all the players inside out. Indeed, he bought many of those players. It was his team. He was also responsible for loaning out some talented players, meaning that Klopp couldn’t call upon them, even if they were to his taste (Balotelli definitely wouldn’t have been; Markovic and Alberto might).

This clearly shows that Rodgers had more time between games, as he averaged pretty much just one cup game per month at the start of the season; Klopp ended up averaging three. Twenty two cup games in seven months is pretty crazy. So there is no comparison to make here.

(You can’t even compare it to Rodgers’ first season, as he had preseason, signed at least three of his own players, and had nowhere near as many cup games to contend with. He also inherited Luis Suarez, Steven Gerrard, Raheem Sterling, Pepe Reina, Daniel Agger and Jamie Carragher, and while Klopp took charge of a talented squad, it wasn’t at that level. Rodgers was also working within the Premier League, so knew all the teams and players.)

Not only did Klopp have to get to grips with English football, where he didn’t know the opposition (but they knew both his approach from his famed success with Dortmund, and indeed, even knew the strengths and weaknesses of his Liverpool players before even he himself did), but he had to do so with a cup game virtually every midweek, and then an injury crisis.

And that, as mentioned earlier, is the noise.

But what if we tune out some of that noise? What if we strip it all away? Well, it makes for some really interesting findings…

This in-depth article is for subscribers only.

How Was Their Season? No 7: Daniel Sturridge