By Gary Fulcher, Daniel Rhodes and Mihail Vladimirov, with additions from Steven Bentley and Joseph Curran.

Liverpool travel to league leaders Arsenal on Saturday – 5.30pm kick off UK time – in what should prove to be our toughest test of the season to date. Not only are Arsenal the current pace setters in the Premier League, picking up 22 points from a possible 27, but they’re also the in-form team having picked up 16 points from a possible 18 over the last six matches. Since suffering a 1-3 defeat to Aston Villa on the opening day at the Emirates, the Gunners have won seven and drawn one, scoring 19 times and conceding six.

Arsene Wenger’s side do appear to be vulnerable at the Emirates however, as they crashed out of the Capital One Cup on Tuesday night losing 0-2 to Chelsea, while a week earlier Borussia Dortmund left north London with a 2-1 victory in the Champions League. 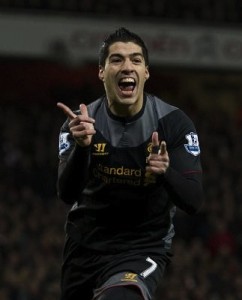 The corresponding fixture last season saw Liverpool lead 2-0 through goals from Luis Suarez (5’) and Jordan Henderson (60’) only for Arsenal to strike twice in three minutes through Olivier Giroud (64’) and Theo Walcott (67’) to earn a share of the spoils. Since Titi Camara’s memorable winner back in Feb 2000, we’ve won just one of the 13 league matches played at Highbury/the Emirates, drawing six and losing the other six.

Liverpool’s record against teams managed by Arsene Wenger (all competitions):

Sebastien Coates (knee), Jose Enrique (knee) and Iago Aspas (thigh) are all absent through injury for the Reds. Philippe Coutinho (shoulder) may be in contention for a place in the squad. 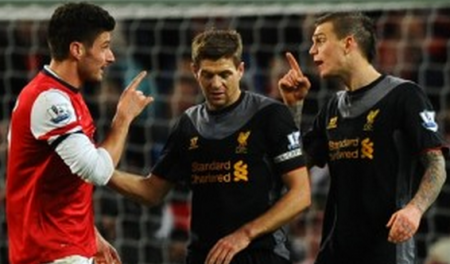 Preview by Daniel Rhodes including:

A shot comparison from their last five games.

There are also two added sections this week: 1) Steven Bentley’s Fixture Difficulty analysis (click here for the original) 2) Joseph Curran’s brief comparison between the bookies’ odds on who will score, and the chances of that happening based on the form of each player. Joseph will be looking at the top two goalscorers for each team. (to be added).