By Andrew Beasley (Twitter / Blog). Statistics were sourced from EPLIndex.

Liverpool’s league results under new manager Brendan Rodgers have left quite a lot to be desired so far, with only three of the twelve matches resulting in Reds wins, and the team having amassed six points fewer than they did from the corresponding games last season.

But has the team been progressing statistically at least? Rather than simply comparing the figures with the averages from last season, I have compared like-for-like with the matching fixtures to allow for a fairer analysis. After all, the average league finish last season of Liverpool’s opponents in this campaign is 9.1 against a full-season mean of 12; 24% more difficult than average, in other words.

It’s also perhaps a little unfair to compare the same fixtures in some ways, as Dalglish took 1.75 points per game from these matches compared with 1.19 for the rest of the season, so he clearly over-achieved compared to the norm. But it’s realistically still the fairest comparison we can do.

A quick note: where I refer to last season, I am talking about the corresponding fixtures and not the whole campaign, unless otherwise stated.

The first thing to note is that Liverpool have given away a total of twenty more shots, with ten more on target, as well as eight more clear-cut chances than they did last season. This goes a long way to explaining why they have conceded sixteen goals as opposed to nine in the last campaign.

What makes matters worse is that so much of the damage has been self-inflicted. Fixtures that saw just one error leading to a goal conceded by Liverpool last season have seen a whopping seven let in this time around, and the Reds have already made more Opta-recorded errors in 2012/13 than they made in the whole of last season.

Of course, Pepe Reina plus three-quarters of the first choice back four are on their fourth manager in as many seasons, so with all the tactical changes that such upheaval inevitably brings it’s not much of a surprise that there have been a few gaffes along the way.

More impressive is Liverpool’s improvement in the ‘challenges’ metrics: 24 more tackles, 55 additional ground duels and 32 extra aerial duels won than last time around. The latter is particularly surprising, in light of the fact that last season’s now departed director-of-football Damien Comolli supposedly put great faith in winning headers, and that Andy Carroll (who won an aerial duel more frequently than any other player in the Premier League in 2011/12) has been loaned out.

Regarding tackles won, the teams that have finished in the top four since 2008 have averaged 15.4 per match, whilst Liverpool have gone from 14.7 last season to 16.7 in this, so that’s further encouragement that Rodgers appears to be on the right track, and once the errors are cut out then the clean sheet tally should hopefully rise.

In light of Brendan Rodgers’ much publicised view on how football should be played, it’s no surprise that improvements have been made in this area, albeit perhaps by not quite as much as you might think.

For instance, possession has risen a mere 0.3% in total across the twelve fixtures, to 56.8% on average, and in half of the matches Liverpool have had less of the ball than they had in the equivalent match last term. The improvement in passing accuracy is more pronounced though, rising from 80.5% to 85%.

As a result of this, Liverpool are losing possession far less regularly this season, at 21 times fewer per game on average. Whilst they gave the ball away 104 times more than their opponents in total last season, the Reds have only done so once more altogether this time around.

As well as keeping the ball more themselves, Liverpool are also still regaining it as often as they were. Crucially though, the Reds are winning the ball back higher up the pitch on average, which suggests that Rodgers’ pressing tactics have begun to take shape nicely. Bear in mind that Rodgers has already improved the pressing of a side that won possession back in the final third on the joint-most occasions last season:

The improvement in possession can also been seen in the interception stats, as the Reds have made eighteen more so far than they did last season. However, as they currently average 10.9 per game whilst the top four sides have averaged 17.7 since August 2008, there’s clearly still plenty of room for further improvement here.

For the purposes of this article, I have created a Final Third Possession metric; in other words, what proportion of the match’s final third passes has a team had.

The good news for Liverpool’s current manager is that the team has seen a small rise in this, from 57.9% last season to 58.4% this. Although the Reds have attempted slightly (4.75) fewer final third passes per match so far this campaign, the more important shift is from an accuracy of 69.2% to a very impressive 73.5%.

To give that figure some context, the top four teams from the last two seasons in the Premier League have an average final third passing accuracy of 73.3%, and from twenty fewer attempted passes per game than Liverpool have mustered this season to boot.

The Reds are passing in the attacking third of the pitch at a top four average, so credit to Brendan Rodgers for achieving that with a young side. But has this improvement been reflected in the creativity figures?

The figures for creating goal scoring opportunities present a mixed bag: twenty-nine more chances created in total, but nine fewer clear-cut chances amongst them. This means that the percentage of Liverpool’s chances that have been clear-cut has almost halved from last season to this, from 23.7% to 12.5%. The conversion rate has improved at least, but more on that later.

Clearly this is an issue, and I think the ‘shot distance’ stats illustrate this perfectly. Although I can only obtain averages for the whole seasons, the Reds take 3% more shots from outside the area now than they did last term. I therefore assume this is why more chances have been created, but less clear-cut ones; Liverpool are shooting earlier than last season, but it means they have less chance of scoring as a result. Definitely something for Rodgers to work on.

A good way to create opportunities and get behind teams is with accurate through-balls. Whilst the rate per game has dropped slightly on last season (from 1.21 to 1.00), the encouraging fact is that the trend is already moving upwards since the start of this campaign.

After only completing one through ball pass across the whole of the first four games this season, the Reds have managed at least one in every game since, at an average of 1.38 per game. This suggests to me that as the players are getting more accustomed to both each other and the new system, this figure should continue to rise.

By some strange quirk of fate, Liverpool have scored the same number of goals (17) from the same number of shots on target (53) as last season. However, as total shots have increased by twelve, this means that shooting accuracy has dropped slightly (from 36.8% to 34%) and as Liverpool have given away more shots, their shot ratio (from 62% to 59%) and shots on target ratio (from 65% to 58%) have both decreased.

One encouraging change can be seen in the ‘clear cut chance conversion’ rate, which has risen from 32% to 40%. Of course, the problem as I’ve mentioned is that they have had fewer such chances to convert. Had the Reds created the same amount of clear cut opportunities as last season, and kept their 40% conversion average from this season then they’d have scored four more goals.

That might not sound like a lot, but when you’ve drawn half of your games so far, it could be worth up to extra eight points, which would put Liverpool joint-fourth in the league at the time of writing.

As you can probably tell from the above, it’s been a bit of a mixed bag so far:

You’ll have to make your own mind up about which of the above statistics is the most important, and which numbers indicate the most regarding progress or regression, but personally I’m positive about the future of this team.

To be having more of the final third possession, and passing at a top four level in that area of the pitch whilst also improving on the conversion of clear-cut chances are exactly the kind of improvements that Kopites wanted to see from last season’s Liverpool team. The number of errors should return to something like the norm, and hopefully as the team adjust more to the tactics and gel by playing together, they should maintain the through-ball trend and create more clear-cut chances.

Or at least that’s the theory. It’s important to remember that some negative things (such as how open Liverpool often are when facing a counter attack, for instance) can’t easily be measured with statistics. But overall I’m satisfied with Rodgers’ progress after twelve league games, though there’s clearly still plenty of work to be done. 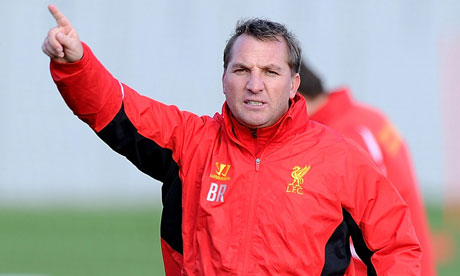