Liverpool’s 3-0 victory over Wigan Athletic last Saturday ended a five game win-less sequence for Brendan Rodgers’ side, and a first victory at Swansea since a 3-0 win in 1982/83 would see the Reds move up into the top ten outright for the first time this season. The game is on Sunday, 1.30pm kick off UK time. 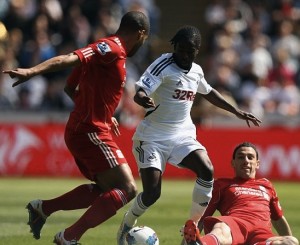 The two sides met last month in the Capital One Cup at the 4th round stage at Anfield, with Michael Laudrup’s side securing a 3-1 victory – over an under-strength Liverpool side – courtesy of goals from Flores, Dyer and de Guzman. The corresponding fixture last season saw Brendan Rodgers mastermind a 1-0 win over Liverpool – thanks to a late strike from Danny Graham – on the final day of the season. The Reds drew 2-2 with Swiss side Young Boys on Thursday evening, leaving us joint second in Group A, three points behind Anzhi with one game remaining.

Tactics for Beginners - No. 5