(Statistics correct up to and including matches played on 8th April 2011. Stats sourced from EPLIndex.)

In the latest ‘Secret Footballer‘ column in The Guardian, the unnamed Premier League player made some very interesting claims about which statistics are valued by Liverpool’s former director-of-football Damien Comolli:

I found this information fascinating, as it is (to my knowledge at least) the first set of hard numbers regarding Moneyball and its potential influence upon recruitment and tactics that have made it out from behind closed doors and into the wider world. (Moneyball seems to be the term given to statistical analysis of any kind these days, whether or not it fits into what the actual Moneyball baseball philosophy was. For this piece, I will refer to it as such, simply because the Secret Footballer uses it.)

If it has infiltrated the Secret Footballer’s club then it’s reasonable to assume that he knows what he’s talking about, even if he doesn’t appear to be a fan himself.

Whilst the data for number of headers won is sadly not available to me, I have been able to compile figures both for crossing and final third regains (which I will refer to as FTRs) to attempt to establish if the Secret Footballer speaks the truth about the match-winning numbers, and also to try to ascertain how much influence Comolli had at Anfield.

Having read the above theory that the target for FTRs is twelve per match, I was disappointed to see that Liverpool have yet to achieve that at all this season (the 0-0 draw at Anfield with Tottenham Hotspur saw this season’s best performance on this metric, with nine). The Reds’ average of 3.31 per match also seemed hugely underwhelming.

Until I looked up the figures for the rest of the Premier League that is; whilst a long way short of the supposed figure of twelve required to potentially win a game, it turns out that Liverpool have the highest number of FTRs per match in the division.

The Secret Footballer may perhaps have his figures for this particular metric wrong, or perhaps twelve FTRs is a much harder target to achieve per match than thirty crosses or forty headers, but it certainly appears to be a statistic of interest to Comolli as the Reds are currently the best team at it.

Unfortunately the figures are only available for this season, so there are only twenty sets of data for the following graph, but the correlation between points-per-game and FTRs-per-game does appear to justify Comolli’s stance: 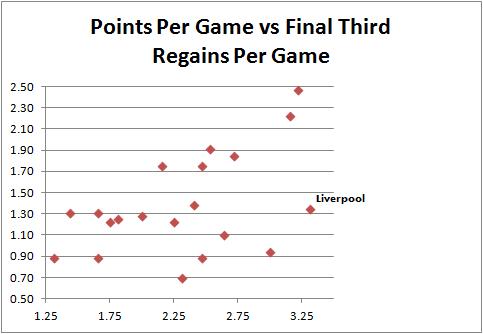 As with quite a few things this season (woodwork hits and clear-cut-chance scoring to name but two), Liverpool are a statistical outlier here who have earned fewer points than they have probably deserved. Whilst acknowledging that the data available here is limited, it is apparent that fifteen of the twenty teams in the division are fairly closely correlated using these numbers. Therefore, if Liverpool can continue to be the best team in the Premier League at FTRs, then I am confident that results can take a turn for the better.

Due to last season’s data being unavailable, I am unfortunately unable to consider if the players that were bought last summer fared well at FTRs previously. However, a look at this season’s figures illustrates that the new boys (and especially Jordan Henderson) are outperforming a few of the old guard at Anfield: 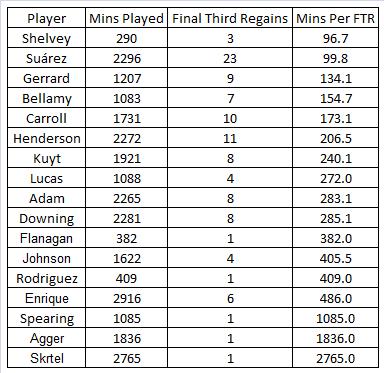 While Shelvey has performed well at this during his limited pitch time, the real star here is Luis Suárez; his figure of twenty-three FTRs is the highest of any player in the Premier League this season, and indeed only five other players in the division have more than fifteen. If these statistics are as important as they appear, then Suárez is absolutely essential to how Liverpool should play.

Obviously we have no way of knowing how much influence Comolli had in Liverpool’s impressive record surrounding FTRs, though the figures do at least back up the Secret Footballer’s claims about him. But about crosses? Here’s a look at how many crosses the Reds have attempted per league game in the last four years:

It’s clear that Liverpool have been crossing more during this campaign (which was the first full season that Comolli had at the club, don’t forget) than in the previous three years, and it’s very interesting to note that the average figure per game has been 30.3, putting the Reds in line with the magic number provided by the Secret Footballer in his column. From the previous four seasons of Premier League football, only the Manchester United team of 2009/10 crossed the ball more than this year’s Liverpool side, and only 0.1 times more per game at that.

To break last season’s figures down further, Roy Hodgson’s team averaged 22.8 crosses per game, as opposed to the 20.5 attempted by Kenny Dalglish’s 2010/11 side. Whilst we don’t know who exactly is responsible for the various changes in tactics and personnel since last season, for a manager to have seen an almost 50% increase in the number of crosses per game is clear numerical evidence of a radical switch in how his team plays.

This supposed Moneyball theory states that by making more than thirty crosses in a game a team will more than likely win, but has that been the case for the Reds this season? Interestingly, not one opposing team has broken the thirty cross barrier against Liverpool during this campaign. Here are the league matches from this season where the Reds have attempted over thirty crosses: 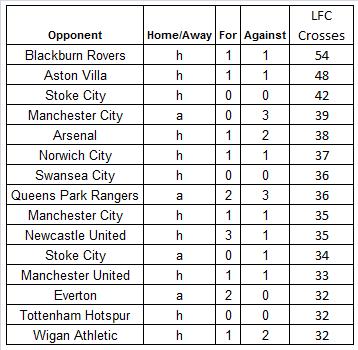 Whilst Liverpool might be adhering to this Moneyball statistical theory relating to crossing, it doesn’t appear to have done them too much good; only two wins from fifteen matches – and none from the nine games with the highest number of crosses – and a disappointing overall points-per-game tally of 0.93, which is relegation form in anyone’s language.

Conversely, the Reds have taken 1.71 points-per-game from their league matches when they have crossed the ball thirty times or less; as that points figure has been enough to secure fourth place in three of the last five seasons, it’s clearly a lot closer to where Liverpool want to be, and so suggests that this particular Moneyball strategy may not be entirely the right way to go. Could this large difference in points-per-game have played a part in the dismissal of Damien Comolli?

That said, of the thirteen games listed above that Liverpool failed to win, there are quite a few that they should have won on the balance of play, so perhaps there’s life in this crossing theory yet. I have plotted a graph of the crossing data against the points-per-game for every team in the last four Premier League seasons, and it does show a degree of positive correlation: 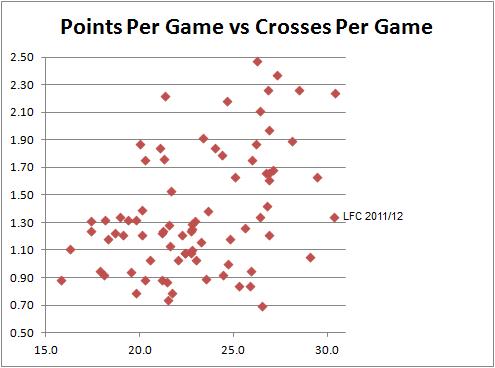 If we make the not-too-radical assumption that Manchester United will win the Premier League this season, then we can say that the champions from the last four seasons (and also the Liverpool side of 2008/09, the best performing runners-up on a points-per-game basis in history) have all crossed the ball at least 26.3 times per game, compared to a league average of 23.1. Perhaps there is something in this particular Moneyball crossing theory after all?

Suggesting cause-and-effect on this would be unwise though, as merely crossing the ball will obviously not win games on its own (the quality of the cross being clearly relevant too, as is the amount of players in the box to receive any pass from out wide). Or do the best teams cross the ball more often simply because they have so much more possession and territorial advantage that even if they infrequently cross by their standards, the overall numbers will still be high? Whether in reality it’s a valid way to play or not, the figures back up the Secret Footballer claims.

A look at who has crossed the ball most frequently this season for Liverpool can perhaps explain why certain players have been favoured in Kenny’s team selections: 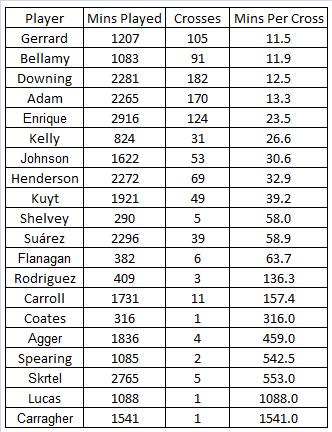 Pure speculation on my part here, but if Comolli and Dalglish decided that frequent crossing was the way to go, and the stats suggest that the possibility that they did, then the above figures could go a long way to explaining why the likes of Downing and Henderson have seen more time on the pitch than Kuyt and Maxi for instance.

Similarly, if we look at the figures for 2010/11, both for a selection of the Liverpool players from that season, as well as the players that were brought in last summer, it’s hard not to think that crossing frequency played a part in the recruitment process: 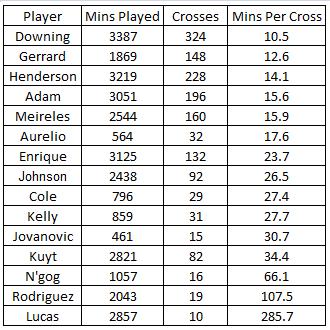 It’s also worth noting that Downing, Henderson and Adam were all the most frequent crossers at their respective clubs last season. Whilst it has long been assumed that chance creation was the primary reason behind the purchases Liverpool made last summer, these figures certainly suggest that how the chances were created was relevant too. If that is the case however, shouldn’t the fact that Downing and Henderson have been crossing less frequently than last season be a cause for concern? Or is it down to the fact that they are now just one crossing option, whereas at their previous clubs they were the main crosser, including set-pieces and corners?

Having now crunched the numbers myself, I may not know who the Secret Footballer is, but I’m certain he knows his stuff regarding a specific Moneyball theory, and its possible influence upon Liverpool FC, too.

Regarding the apparent switch in tactics from last season to this, my personal theory is that the stats Comolli provided showed that playing as we have in this campaign would be more successful, so he convinced FSG and Dalglish that this was the way to go. As the tactics have in fact proved less successful than last season, Comolli was sacked whilst Dalglish remains.

That’s not to say that I think Comolli has picked the tactics and the players entirely on his own with Dalglish as a figurehead; far from it. But I do think that he could easily have made a convincing argument to a board with a history of using statistics to their benefit, and that Dalglish could have bought in to it too.

The acid test for my theory will obviously be how Liverpool play in the future; if the Reds revert to the type of football that lead them to be the third best team in the division during Dalglish’s tenure last season, and with similar results, then the decision to dump Comolli will be justified. It’s a big ‘if’ at this point though. 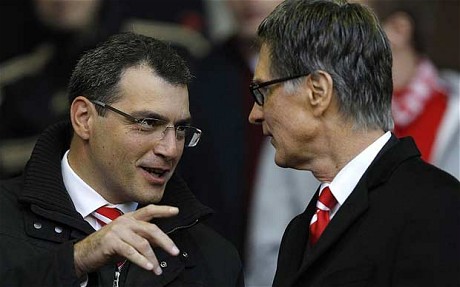