By Andrew Beasley. Statistics sourced from EPLIndex, and correct up to and including Sunderland away (10/03/12).

After a series of poor league results, including three defeats in a row for the first time in nearly a decade, stern questions were being asked of Kenny and his team’s management of Liverpool, probably for the first time; were the most suitable players purchased in the summer, have the tactics been right, and so on.

Things had got so bad lately that Dalglish’s recent league form had matched that of his predecessor; Roy Hodgson recorded an average of 1.25 points-per-game at Liverpool, and going into the Everton game, the Reds had the same figure from their previous sixteen matches this season too (though as the first eleven games this term yielded 1.73 points-per-game, things hadn’t reached Hodgson-esque levels overall just yet).

I wrote a brief piece for EPLIndex recently which demonstrated that only on very few occasions this season have Liverpool been bested by their opponents at various match statistics, illustrating that, even if the results haven’t always been quite what is desired, at least the performances have generally been good.

But there was no comparison to other teams in that article, so whilst the numbers were good, were they any better or worse than anyone else, or what had come before at Liverpool?

I have now also collated the data for Roy’s tenure in the Anfield hotseat, in order to try to quantify how much progress has been made from last season to this, and therefore the Dalglish data included here is just for this season, not for his very impressive half of 2010/11.

A lot of people out there think it’s pointless to compare the current team with probably the worst Liverpool side in living memory, but there’s not really any other way to assess progress; after all, that team was the starting point for the Dalglish era.

[PT: while money has been invested in the squad since Hodgson’s departure, the wage bill has been cut. It’s also worth noting that Hodgson got to call on Torres, Lucas and Gerrard almost every game – three players Kenny has had to do without for most of this season, for different reasons.] 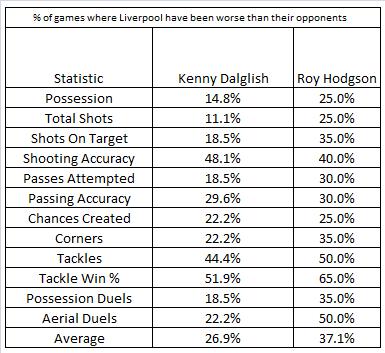 In view of the general trend of performances this season, it’s probably not too much of a surprise to see that Kenny’s team come out on top in all-but-one of the categories, and similarly not much of a shock to see that it is the poor performance in shooting accuracy that has stopped a clean sweep of progression.

To break it down further, Liverpool have failed to win seventeen of their league games this season so far, and all thirteen of the occasions where they have had a lower shooting accuracy than their opponents are amongst those games. Of course there’s more to winning a game of football than what percentage of your shots are on target, but it certainly seems to have formed a direct link for Liverpool in the majority of games this season.

So broadly speaking, the team has improved in terms of its control of games. But the above measure is too simplistic to draw any specific conclusions; after all a team could ‘dominate’ the possession with any number from 50.1% upwards for example, so to assess the progress with more accuracy we need to compare the actual figures per game: 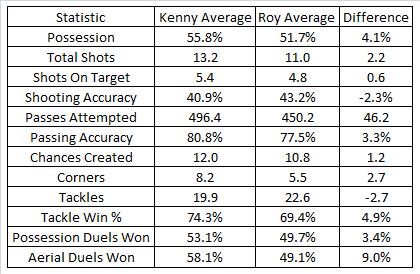 Dalglish’s team has improved the figures in ten of the twelve categories; once again the shooting accuracy has let the side down, as we all know, but also the frequency with which the team makes tackles has decreased.

This is down to two things to my mind; firstly, as the team has been on the backfoot less often, they would naturally not need to make quite so many tackles. But perhaps the bigger influencing factor on this has been the absence for over half of the season of Lucas Leiva.

In the twelve games last year’s player-of-the-year featured in this season, Liverpool attempted an average of 21.5 tackles per game, as opposed to 18.7 in the other fifteen matches. Whilst Lucas made a tackle every 16 minutes, Jay Spearing (the closest to a direct replacement in the squad) has only made one every 28 minutes. That’s quite a shortfall.

What shows Lucas’ tackling in an even more impressive light is that (at the time of writing) only thirteen players in the Premier League have won more tackles than the Brazilian this season, even though he has played less than half of the possible games. Quite an achievement, and a perfect illustration of how he has been missed. 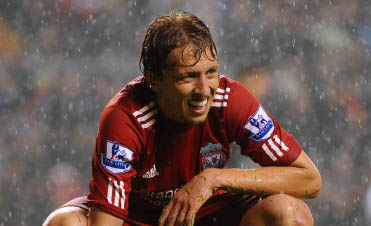 On the positive side for the team, Dalglish’s side have improved on all the creative aspects of the game, though I was surprised to see that they have only created 1.2 more chances per game than Hodgson’s team; it has certainly felt like a bigger gap than that when watching both sides.

It’s also good to see that the amount of passing and the passing accuracy have improved; indeed, in twelve of their league games (so nearly half of the season), Liverpool have completed more passes than the opposition have even attempted in total, by an average of 115 passes across those twelve games.

It hasn’t always been to the team’s benefit though; after all, completing 180 more passes than Manchester City attempted at the Etihad Stadium made little difference in a comfortable 3-0 win for the home side. But being able to control the ball for the majority of the match is a good start, even if this particular Liverpool side doesn’t yet seemingly possess the game intelligence, or a natural (or in-form) finisher, to make the most of it.

Of course, a football match is a two-way street, and it’s not just about improving Liverpool’s statistics, but ideally reducing the impact that the opposition have upon the game too. 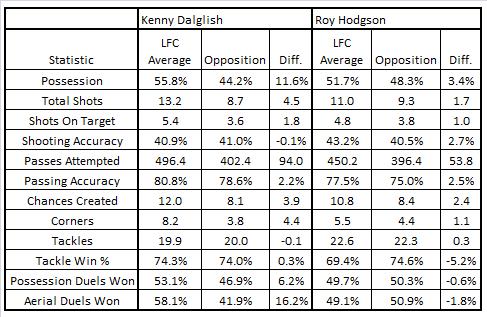 So what can we see from this? I think we can safely say that (in  numerical terms at least) performances have improved, though perhaps not by quite as much as you might think. That said, the key stats of shots (both on target and in total) and chances created have swung  in Liverpool’s favour for both themselves and the opposition, so that’s a very encouraging sign.

Of course, Liverpool’s poor scoring record has not made this progression as impressive as it probably should have been. Even Roy’s turgid football, which misused a disinterested Fernando Torres, saw the Reds convert 10.9% of their shots, as opposed to 8.6% this time around. (Of course, the shooting accuracy from the Everton game will improve Kenny’s figures.)

[PT: Andrew also recently wrote this piece about shot placement, and yesterday he noted on the TTT forum:

I recently wrote a detailed article for The Tomkins Times which looked at how important shot placement is, and whether poor form in this discipline is at the root of Liverpool’s low scoring record in the league this season. The findings suggested that it has been, and that Liverpool have placed too many shots in the low-centre of the goal where the goalkeeper has a better than average chance of making a save.

I was reminded of the above article by Steven Gerrard’s three goals in the Merseyside derby last night; all of which appeared to have been hit into the upper half of the goal. I checked the stats to investigate this further, and firstly found that the captain had placed all four of his shots during the match on target, which in itself is largely unheard of by a Liverpool player this season.]

Even maintaining last season’s far-from-impressive average would have seen Liverpool score nine more goals this season; which may not sound a huge amount, but as they’ve only been beaten by more than one goal on three occasions, then there have been fourteen games where one more Reds goal would have lead to further points. A few extra goals could have easily (hypothetically at least) made quite a difference. Had the conversion rate increased in line with everything else, then who knows where Liverpool might be in the table now.

In summary, Liverpool have generally been in greater control of their matches than they were last season, and, but for some poor finishing, might have shown some very real improvement. If they can add to the squad and improve further again next season, then there might just be hope for Dalglish’s team yet.