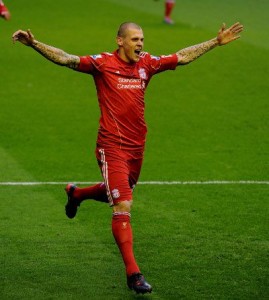 Liverpool have the chance to reach their second semi-final of the season – and with it a second visit to Wembley of the campaign – by defeating Stoke City at Anfield in the quarter-finals of the FA Cup. We reached this stage by defeating Brighton & Hove Albion 6-1 at Anfield, while Stoke overcame Crawley Town 2-0.

Sunday afternoon’s meeting between the two sides will be the fourth of this campaign. Liverpool lost the first league meeting 1-0 at the Britannia Stadium and drew the reverse fixture at Anfield 0-0. The clubs also met at the 4th round stage of the Carling Cup, with Liverpool sealing a 2-1 victory at the Britannia and a repeat of that outcome would do nicely.

There have only been six previous meetings between the two clubs in this competition and Liverpool have yet to taste defeat or concede a goal. The first meeting between Liverpool and Stoke was in 1900 at the first round stage, played at Stoke’s Victoria Ground. The game finished 0-0 and Liverpool won the replay at Anfield courtesy of a solitary John Hunter strike. The teams then met each other in 1975 at the 3rd stage at Anfield. Goals from Steve Heighway and Kevin Keegan secured a 2-0 win in what was Bob Paisley’s first game in the FA Cup as Liverpool manager.

The two clubs locked horns in the 4th round of the FA Cup in 1983, once again at Anfield, and Liverpool won the tie 2-0 courtesy of strikes from Kenny Dalglish and Ian Rush. Kenny Dalglish was manager of Liverpool when the sides next met in this competition five years later, when they were drawn to face each other at the 3rd round stage in 1988 at the Victoria Ground. The match ended 0-0 and a 9’ minute strike from Peter Beardsley was enough to win the replay at Anfield 1-0.

I mentioned this in my Brighton preview but it’s worth repeating here: Kenny Dalglish has a phenomenal record in the FA Cup, reaching three finals (winning two), and a further semi-final appearance between 1985/86 and 1989/1990 as Liverpool manager during his first stint in charge. He also reached the FA Cup final with Newcastle Utd during his only full season in charge of the Geordie outfit in 1997/98, losing to Arsenal 2-0.