Last time these two teams met in the league at Villa Park, Stewart Downing scored the winning goal. This season the England winger was on the opposite side in a fixture that has traditionally seen a dearth of goals – only five have been scored in the last five Premier League games between the two sides in Birmingham. And Steven Gerrard, who has nine goals against the Villa, was unable to add to his tally due to injury. 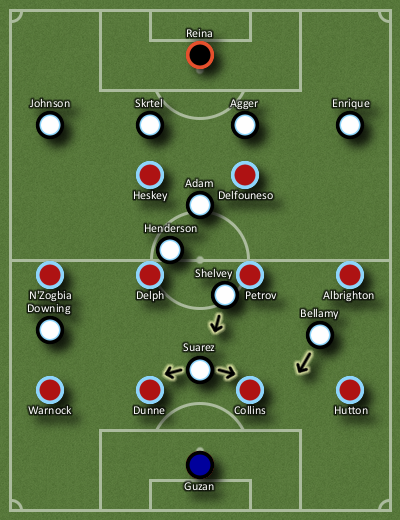 Villa were rocked before the game started with the news that Darren Bent has picked up an illness and was unable to participate in the game. While he was out shopping, Agbonlahor was also missing through suspension. This forced them to play Heskey and Delfouneso up front in their usual 4-4-2 formation. The other slight surprise was that Delph was favoured over Herd to partner Petrov in the middle of the park.

Dalglish sprung a surprise of his own by choosing Shelvey in his starting eleven. This made the formation a sort of 4-1-2-3, with Suarez up front and Bellamy and Downing playing as inverted wingers either side of him.

Recently, I expressed my concern that Liverpool’s 4-1-2-3 isn’t potent enough in attack. This is because the front three cannot create the attacking angles necessary to open up stubborn defences on their own. There is also the problem of how to feed and/or support the lone striker. Without Gerrard, there is nobody in the team who can consistently drive from the midfield to support the attackers in central areas.

However, with Shelvey recently recalled from his loan spell at Blackpool, Liverpool had someone who could provide some help to the lone forward for the first time since the Manchester United match. The similarities between Gerrard and Shelvey are obvious – both are attack-minded playmaking midfielders, both have good vision, a good shot, and naturally like to push forward and help out the attack.

All of this was helped by the presence of Suarez over Carroll. The Uruguayan is a more rounded player than the Englishman, and with two inverted wingers (as well as Shelvey) the team had good presence in dangerous areas in a way that they would not have done with Carroll, “normal” wingers and nobody driving from deep.

Against Fulham the team was not performing well enough to use 4-1-2-3. Carroll was up front and only Suarez on the left was providing any attacking presence in the central channels. Bellamy, the other forward, was out wide on the right. None of the midfield trio was willing, able or told to push on from the centre and add bodies in dangerous areas. After Fulham adapted their tactics in the middle of the first half, Liverpool’s attacking patterns were insufficient to break down the Cottagers.

The Villa match was a clear example of how Dalglish and the coaching team had learned from the failures of the past. They did it with the false nines/inverted winger approach (when they adapted the formation from the Norwich game and made it work perfectly against QPR); now they were doing it with the 4-1-2-3 formation (adapting the style from the Fulham game and applying it to Aston Villa).

From the beginning Liverpool used their midfielders to control the possession and dominate the passing rhythm. Adam remained the deepest of the three, which gave him the space and time to put his foot on the ball and use his vision to mix short, medium and long range passes. This allowed the team to recycle possession when needed or to play a good penetrative ball when the opportunity arose. They were helped by Aston Villa playing with only two central midfielders – they naturally marked Henderson and Shelvey, leaving Adam free in the pocket between Villa’s midfielders and their strikers.

It was interesting from a tactical point of view how Liverpool controlled possession and then managed to reach attacking positions. When the visitors entered Villa’s half, the 1-2 triangle (Adam behind Shelvey-Henderson) became a 2-1 triangle, with Adam pushing up slightly to come level with Henderson and Shelvey sprinting into the hole behind Suarez and between the two wingers. In doing so, Liverpool created four different attacking angles in the final third, with three players occupying Villa’s most weakened zones. They exploited the gap behind the midfield two (with Shelvey in the hole), the outside channels between the full backs and centre backs (with Bellamy and Downing cutting inside) and in the channel between the two centre backs (with Suarez attacking the channel and roaming in the central attacking zone).

Bellamy and Downing had clear but different tactical roles. On the right, Downing played wider, often hugging the touchline and trying to stretch the play. He would cut inside only when he received the ball, which helped to create spaces through the centre and down the opposite flank. On the left, Bellamy had more of a free role, drifting in field and staying higher on the pitch than Downing. At some points he cut in so far that he was practically on the right flank. This meant that he was closer to Suarez, which meant he could support the lone forward. Bellamy was the primary attacking outlet for the whole team in the first twenty minutes, and he received the ball more often than any of the other attacking players. 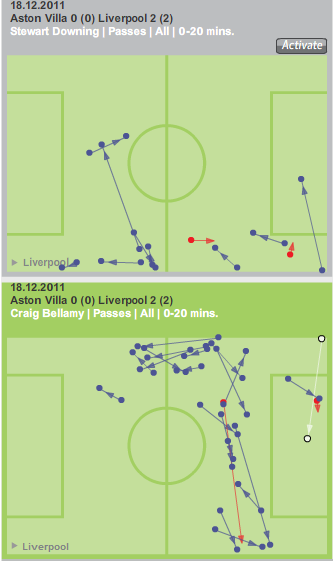 Adam and Henderson were therefore able to recycle the ball while the front four looked for good attacking positions before playing probing forward passes. 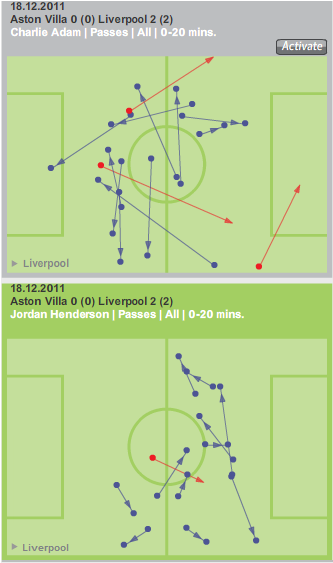