Over the past few weeks, there has been some discontent expressed at Dalglish’s tactics. The “lack of control” during matches has led many to wish for a return to the style of play Liverpool executed under Rafa Benitez.

In my last piece I explained the differences between these two managers and why their styles are not really compatible. But what I didn’t do, and will try to do here, is look at the current squad and see whether it is even possible to play 4-2-3-1 with them – something which would please a vocal section of the club’s support.

Rafa used this formation to suit his own tactical preferences. His micro-managing style, which required tactical depth and versatility, was perfectly suited to it. It allowed him to control the match (in both phases) as well as giving him enough players in every area of the pitch to execute his plan.

It took him a few years to acquire the players necessary to play this style. The lone striker was the key position, and it was only after Torres was bought that he could use the formation to the best of its ability. 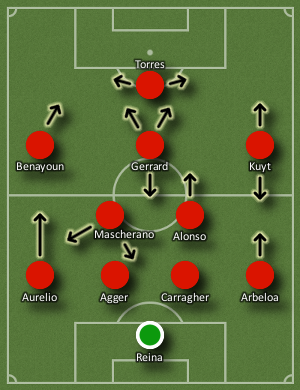 In the first years at Liverpool Benitez lacked that Torres-like player – a fast, mobile, natural finisher who could intelligently work the channels and participate in the overall build-up play. On top of that, he could fulfil his defensive duties up front by pressing the opposition. He became the focal point of the team (and the formation). The priority was to feed him the ball and let him play to his strengths. That service came from all over the pitch – Alonso from deep, Benayoun from out wide, Gerrard nearby in the centre – and this was helped by the intelligent runs from the wide players Aurelio and Kuyt who offered movement either from the touchline or from narrower positions. Everything revolved around Torres.

What makes that Liverpool team so efficient tactically, however, was that they had other key players around Torres: Alonso, the deep-lying playmaker, and Gerrard, the false ten. Both were key for laying the foundations. Alonso controlled the rhythm of the match from his deeper position where he had space to survey the field. Gerrard created attacks from an advanced position, using his drive and work rate to punch through the opposition.

The team could outnumber, or at least achieve parity, in the centre of the pitch. Each player had their own role and their own personal style which meant they complemented each other perfectly and allowed them to gel as a unit. It was no great surprise that Liverpool controlled most of the matches during that period. Liverpool pressed relentlessly in defence, squeezing the opposition hard. In attack, the team could play with patient passes, using the natural triangles the formation created across the pitch. When a crack appeared in the opposition’s defence it would be exploited. However, the side could also attack quickly through Gerrard and Torres with one-touch football.

The problem for the opposition was how to stop Liverpool’s three key tactical weapons at the same time (the deep-lying playmaker, the false ten and the creative poacher), because they were completely different threats which required completely different tactical solutions. Obviously it was necessary to deny Alonso time on the ball, but that had to be tempered with the need to stop Gerrard and Torres running in behind. If the opposition went deep to cover Torres, Alonso was free and Gerrard could drop into the hole with him to help pass the ball and work openings. Man-marking Gerrard was not an option as he was at the peak of his powers and virtually unplayable.

Obviously, the current Liverpool team doesn’t possess such players. Even Gerrard, with his injuries and the march of time, is not the same player. This should be taken into account, and why willing Dalglish to play 4-2-3-1 doesn’t add up. It’s impossible for him to play the system Rafa employed, and it ignores the very different philosophies that the two managers have.

In any case, the call for 4-2-3-1 is based on the premise that 4-4-2 isn’t working, but I would argue that it is. I have explained on this site how the first eleven games show that the team is moving in the right direction with it. Tactically the decisions that are being made are improving, reaching the level of the last two games when they were perfectly sound, even if the execution and the end results leave us wanting more.