Liverpool’s trip to the DW Stadium on Wednesday night will be only the 15th meeting in all competitions between the two clubs. The Latics have enjoyed six consecutive seasons in England’s top division but they find themselves in 18th place – just one point from safety – thanks to a terrible sequence of results that saw Roberto Martinez’s side lose eight games in a row between September and November.

It’s a credit to Wigan Chairman Dave Whelan for sticking with their Spanish coach despite their poor run of results. His faith seems to have been justified (for now) as the Latics appear to have turned a corner and have lost just one of their last five games (4-0 at home to Arsenal) and are three points off 15th place. 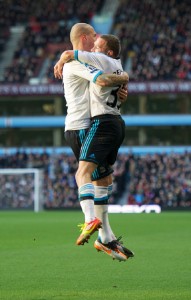 Kenny Dalglish’s side have lost just one of their last 11 matches in the Premier League, no doubt helped in part by having the best defense in the league. Kenny Dalglish appears to have found the right balance at the back with the centre-back partnership of Martin Skrtel and Daniel Agger. The 4-0 defeat at Spurs aside, we haven’t conceded more than one goal in the other 15 matches played. We’ve conceded just 13 goals in 16 matches and our 2-0 win over Villa saw us keep our 6th clean sheet of the campaign.

Liverpool will be hoping to make it three league victories in a row – for the first time this season – with victory over Wigan at the DW Stadium and it would be a nice momentum builder as we enter the busy festive period, as the Reds sit level on points with 5th place Arsenal and are three points behind Chelsea in 4th.

Liverpool’s overall record against Wigan Athletic in the league: