Using the data from the Transfer Price Index, Liverpool fan Andrew Fanko takes a look at the mid-range purchasing of the four most successful managers in Premier League history in terms of average points (minimum of two full seasons). Or, in other words, the managers of the ‘big four’ between 2004 and 2007.

Fast forward six years and only one of those statements holds true. Fortunately for the Scot, such was the style, grace and effortlessness with which he went about winning medal after medal during his illustrious career, that the football public are generally pretty fond of him.

In fact, it’s precisely because of his legendary status that it’s so disappointing to have witnessed his sharp and insightful analysis descend into nothing more than lazy and clichéd punditry over the last few years.

Many excellent articles were written during the World Cup about the scant presence of real expert analysis, especially among Hansen and his chums on the Beeb. And we all know he’s been phoning in his Match Of The Day critiques for a good while now, so I’d like to focus on just one of his favourite soundbites.

I chose 2004 for a good reason. Rafa Benítez had just arrived at Liverpool and Mr Hansen was quite right to say that Gérard Houllier’s time was up.

Just a few months later, however, and an admittedly insipid defeat to a Peter Crouch-inspired Southampton had the Scot labelling the Spaniard’s Liverpool team as the worst since his own magnificent career had come to an end 14 years earlier.

Well, it must have been some feat for that manager to inspire such an abject bunch of players to win the European Cup less than 150 days later, right? 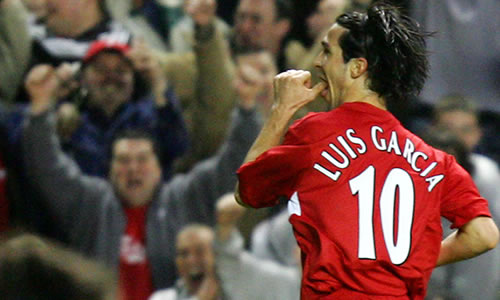 Anyway, Paul has already dissected, and largely disproved, Hansen’s argument that Benítez left behind a weaker squad than he inherited, so I wanted to focus more closely on that one specific claim that the Scot has made over and over again for the last 18 months or so: Benítez had a shocking record with mid-range transfers.

Hansen tends to give the arbitrary range of £3m-£10m when he makes this claim, but I thought I’d use the Transfer Price Index devised by Paul and Graeme Riley in Pay As You Play to shed more light not only on Benítez’ record when buying off the middle shelves, but also on the records of his main rivals in the Premier League: Alex Ferguson, José Mourinho and Arsène Wenger.

I think that it’s fair to say that a mid-range transfer for one of the top four sides during the Spaniard’s time at Liverpool was more accurately between £2m and £15m in today’s money (CTPP, Current Transfer Purchase Price – calculated using TPI inflation).

At the lower end of the scale, this excludes free transfers and youth signings, but also allows us to factor in the tight budget that the former Valencia manager found himself working to in the latter part of his reign. At the upper end, it accounts for the fact that United and Chelsea, in particular, were regularly spending in excess of £20m on their big-money buys.

Both these factors stretch what was traditionally seen as a medium-priced transfer.

So, let’s start with Benítez. Here are all his £2m-£15m CTPP signings at Liverpool, the genuine profit or loss made on those that have left the club and a part-objective, part-subjective view of how successful they were overall from a playing and a financial perspective: 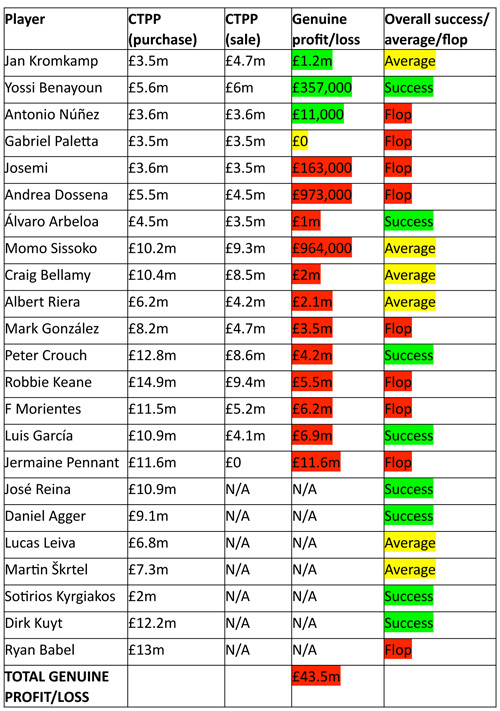 [Although the current value of those still at the club exceeds the £43.5m deficit on those sold]

What about José Mourinho, the man so dominant in the first half of Benítez’ stay in England?:

And how about the most successful manager of his generation, Alex Ferguson?: 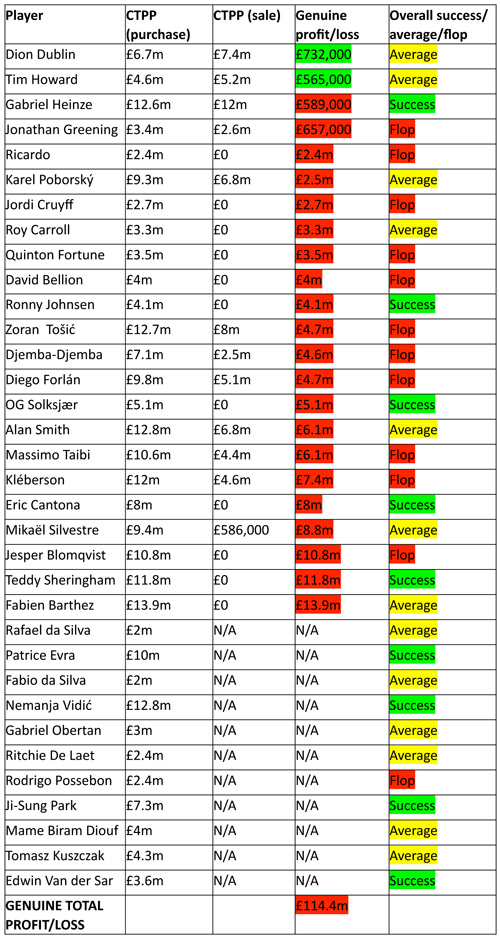 And finally, what of Arsène Wenger?: 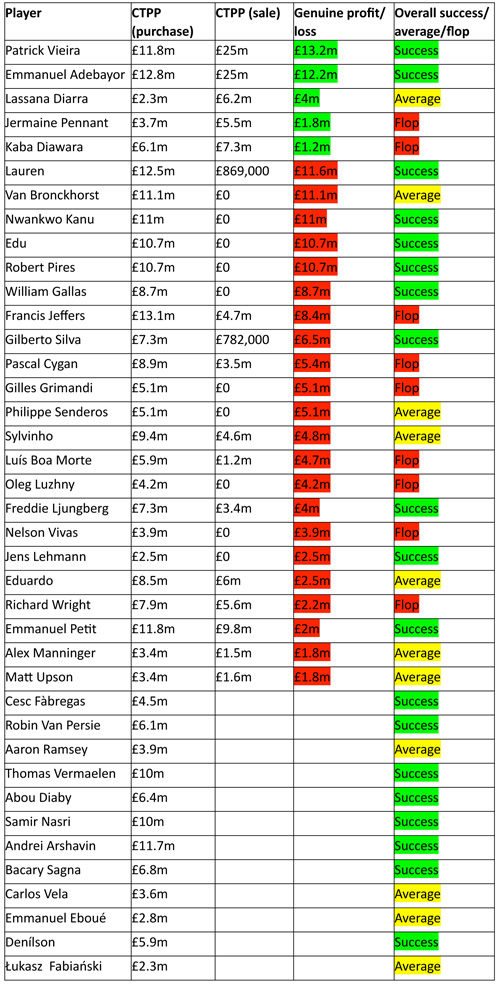 First things first: Arsène Wenger’s stellar reputation in the transfer market is broadly well deserved. Despite managing in the Premier League for four fewer years than Ferguson (transfers made by the Scot before the advent of the Premier League were not considered), the Frenchman has bought six more mid-range players than his old adversary. It’s a clear indicator of where the financial balance of power has been between the two during Wenger’s time in England. He may have spent fairly big to build his superb side of the early-to-mid ‘noughties’, but he was never able (or never chose) to blow a massive wad of cash on one player.

Wenger’s strike rate in the middle of the market is excellent, and is comfortably the best of the four managers featured. Indeed, these figures don’t even include the dirt-cheap gems like Anelka, Touré and Song. In fact, throw in the combined genuine profit of £68.5m on the Frenchman and the Ivorian and Wenger’s financial nous is even clearer.

Rafa Benítez and Alex Ferguson actually have fairly similar records at this level of business. The former Liverpool manager has a greater percentage of successful buys, but he has also signed a slightly higher percentage of duds than the knighted Glaswegian.

From a financial perspective, however, there is only one winner. Benítez is ridiculously lambasted in some parts of the media for wasting money on precisely these kinds of transfers, and yet his genuine loss per player is £1.5m lower than Ferguson’s.

Have you ever heard Ferguson being criticised by Hansen – or anyone else for that matter – for buying terribly in this range of the transfer market? Didn’t think so.

So why the difference in league performance in most seasons? Seems pretty obvious to me.

Twelve of these (all bar Yorke, Berg, Cole, Verón and Stam) were fielded against Benitez’ Liverpool, and many of them didn’t just fractionally exceed £15m CTPP; they positively obliterated it.

And how many times was the Spaniard afforded the same luxury? Five: Alonso, Aquilani, Johnson, Torres and Mascherano.

Benitez did, admittedly, inherit four £15m+ CTPP players (Diouf, Heskey, Cissé and Hamann). The first two of these were, of course, sold before they even kicked a ball (or spat at a fan) in anger for the Spaniard.

I was staggered to find that Mourinho signed only six players in that price range during his time at Chelsea. And his 0% success rate gives a pretty clear indication that his shopping talents lie at the upper end of the market. Good job, then, that he was able to break the magic £15m CTPP mark on 11 occasions in just three years at Stamford Bridge: Tiago, Carvalho, Wright-Phillips, Shevchenko, Kalou, Ashley Cole, Malouda, Mikel, Ferreira, Essien and Drogba.

Well – it’s certainly been a journey. If you’re still awake, I’ll offer you a conclusion.

Mourinho’s sample is almost too small to consider, but even with this limited set of data it doesn’t look great for the Portuguese, and his propensity to be more comfortable operating on a massive budget has been further proved by his transfer business at Inter Milan and Real Madrid.

Arsène Wenger really is the master of shopping on a Tesco (rather than Harrods or Lidl) budget. He signed plenty of duds that aren’t listed above (Stepanovs, Grondin and Wreh to name but three), but that’s because they were very cheap and have therefore rightly done little to blot the Frenchman’s copybook.

Rafa Benítez had a decent record in the mid-range of the transfer market during his six years at Anfield, and was even cannier from a financial perspective than the rightly lauded Wenger. He bought some duds, sure, but he also acquired more top-quality players for relatively little cash than his Scottish rival from up the East Lancs Road – a man whose record in the transfer market is seldom, if ever, queried.

So, Mr Hansen, perhaps you’d be so kind as to think and consider the facts before you’re next tempted to hop aboard the lazy-cliché train.

Click for more on “Pay As You Play”, and links to order the book