Best posts of the week:

1 – Tony Mckenna (macattack) reflecting on the goalless draw with Man Utd at Anfield:

If quality goal opportunities are on the wane, is the implication that the quality of Assist making has rescinded? And has the impact of Robinson/Trent on the flanks, been nullified?

These are the aftermath questions buzzing in my head today. Don’t get me wrong, I am not over looking the whole context of other black swans: injuries and, indeed, match official decision making. Although, in truth, the latter are not exactly random events but more the intent of conscious design. Honestly, I don’t want to go down this route. But there were too many strange decisions yesterday. Not least of all, pathetic free kicks going United’s way, when it even looked like us who were offended against. And, of course, Tierney’s intervention when Mane was on goal, and all of a sudden the time added on enters a dimension that would have had Einstein flummoxed.

2 –  Stevenson1988 on Firmino’s form and reasons for Liverpool’s recent problems:

I felt desperately sorry for Firmino yesterday as he just looked off the pace. When he needed to keep running he stopped and when he needed to stop he kept running. He was desperate to get shots away when players were better placed and he didn’t connect properly when he had a clear sight of goal and it bobbled tamely to De Gea. The problem I have when I watch him is that he is the closest I have seen to Dalglish since he retired with his ability to bring others into the game, yet on at least 2 occasions yesterday he didn’t do that, instead trying to get shots away when others were better placed.

Having said that, what is also clear is that we just cannot catch a break. That game at Villa seems to have set an unwelcome trend which is: any deflected shot or pass in the danger area for the opposition will either result in a goal or give them a great chance – Pogba’s yesterday being a case in point. Conversely, every deflection in the opposition’s box will fall to a defender. Utd’s wins against Wolves and Burnley were both courtesy of deflected goals which have gifted them 4 points. It happens, it has happened to us in the past, but at the moment the footballing Gods are just giving us a major kicking. I don’t like Martin Tyler’s commentary, but he was right yesterday when he said that we wouldn’t care how the hell we scored, we just need the ball to somehow end up in the net. The longer the drought continues, the more we snatch at chances, shoot when we should pass (and vice versa), or take one touch too many. It will change, and we are by no means out of a title race as yet, but we have given the rest of them hope where there shouldn’t be any. Notwithstanding the injuries, I still believe that we are the best team in the PL, but even the very best need lady luck to smile on them occasionally, sadly at the moment she’s had too much bloody botox and can’t raise a smile!

Mo is an absolute legend. Have he and the club started thinking about him moving on at some point? Maybe. But whatever is happening off the pitch at the minute, it feels that if he had a split second opportunity to ensure everlasting world peace and save humanity by using his right foot, I think he’d probably cut back on his left.

4 – Serpico with some much needed perspective after the defeat to Burnley:

I find that I can’t be too down about our recent form. Maybe it’s because the world is on fire, so I’m distracted. But also within the narrower football-verse, I feel the title itch is not there – and there’s a relief in that. Having followed this team for circa 30 years I’m quite used to those sorts of funky spells. Clearly what we have gotten used to in the past three years was luxurious, but we’d only be kidding ourselves if we thought we’re immune to slipping down at some point – and I don’t think anyone here really entertained the thought that we are entirely immune.

The reason I’m not upset is the same reason that I was having a pretty good time following Liverpool for the past three decades: I am tied to the road, not to the destination. My interest is in the people who are trying to find solutions to challenging situations (Rafa or Klopp provided particularly charismatic talismans in that respect), and the figures on the pitch who are trying to salvage something out of nothing by running and kicking. In this sense, from my perspective this is a thriller – and we are now at that point of the plot trajectory, after about 70 minutes passed, when the protagonist is captured by the villain and is tied to the chair. Yeah, it’s obviously not an ideal situation, but with Klopp and the calibre of players on our team (even as unbalanced as it is due to injuries) you also know that at some point – hopefully sooner rather than later – there will be a response.

As far as crisis narratives go, this one isn’t too bad. Solid ownership. The best manager a club can hope for – who is firmly committed. Players who aren’t making noises about wanting to go elsewhere (nothing like the Suarez/Torres days). They have riddles to figure out: how to build a midfield aggressive enough without both Fabinho and Hendo there? How to diversify Robbo’s and Trent’s attacking threat beyond the now-predictable crosses? How to create spaces for Salah and Mane to exploit? But that’s to be expected. I can’t wait to see what solutions Klopp and the team come up with in the coming weeks. The journey is still the journey, and I want to be watching when this group turns the corner. Old Trafford would provide a nice setting for this as anywhere.

5 – Benjamin analyses the likelihood of the current run of results turning out as they did:

I don’t think the situation is anywhere near as bad as it seems. I believe it’s a slight dip in form combined with an unusually bad run of luck, which I think is supported by the data below.

In the following excel sheet, I’ve compiled the expected goals from Liverpool’s last five BPL games (source: https://understat.com) and used a Possion distribution to calculate the probability of Liverpool and the opposing team scoring n goals respectively. From that, we can calculate the probability of the match ending in a home win, draw or away win:

As the data show, Liverpool would have been expected to win each game, aside from the one versus Manchester United, based on the expected goals. In fact, none of the actual outcomes had a probability greater than 30 % (note that the probability for the Burnley win has been massively skewed by the penalty):

I’ve also looked at four games from last season with similar expected goals, that can also be found in the excel sheet: Southampton (A), Burnley (A), Man City (H) and Crystal Palace (A).

Obviously there are a lot of things to criticize within this data set, but I think it illustrates the extent of Liverpool’s bad luck – which is only played up even further when compared with last season’s incredible luck.

The truth is that Liverpool are not playing terrible at the moment, and they are in fact posting underlying stats that are comparable to a number of games from last season. So, as Klopp rightly said, Liverpool just have to keep doing what they’re doing, and the variance will adjust at some point – even though it’s tough to believe at the moment. 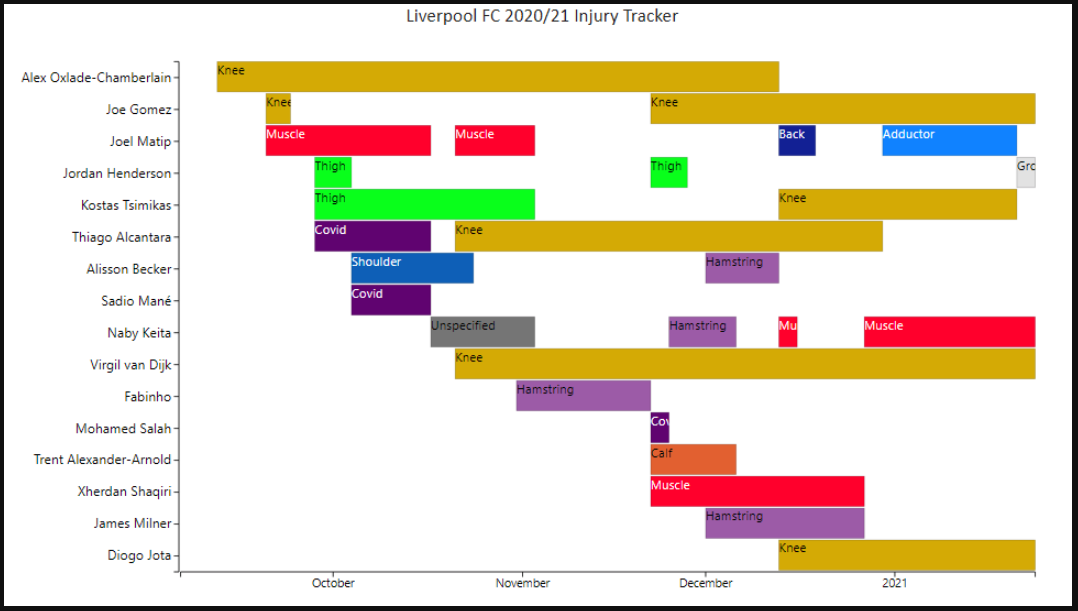 Seventeen shots is excellent on most occasions, though the fact we’ve managed the exact same figure in three of the four previous matches maybe we need to move away from this and push for 18 or hold back on 16? It’s got the point where I’m creating negative superstitions about shot totals trying to explain the blank in front of goal! Grim.

However, only nine shots were inside the box, and other than Bobby’s miss (38% chance of a goal) on the 58th minute we didn’t another shot rated higher than a 12% chance. The rest had a lower than one in ten chance of a goal. That’s a big issue. On the flip side, the visitors only had eight attempts on goal but two of those were big chances (Fernandes and Pogba). They were both after the 75th minute as we began to tire.

Another indication of our travails in front of goal is the shot accuracy of our players, who only tested De Gea three times. This makes it only nine shots on target from the aforementioned 60 attempts without a goal. Man Utd managed to get 50% of their shots on target, so it was a good job Alisson was on top form.

Title Race Not Even Half Run – And Injury-Hit Liverpool Still In With A Shout, by Paul Tomkins.

As Pep Lijnders recently said, the group dynamic has been a big part of the club’s success, and therefore it’s a risk to disrupt that. You can’t just go and pick up another Virgil van Dijk. You can’t risk signing dickheads. A great new player could come in and do terribly in the first few months, and that would be worse than Henderson doing a 7/10 job there, although he was 8.5/10 against United. While Henderson has rarely played as a centre-back, Fabinho’s record there is outstanding, and the pair do understand each other more than two strangers would.

There’s also the uncertainty as to what shape van Dijk and Gomez will be in next season, after terrible injuries, and if the plan needs to be short-term or longer-term; Liverpool wisely waited for van Dijk in 2017, to suffer some short-term pain for long-term gain beginning in early 2018. Fans struggle to be that patient, obviously.

Jordan Henderson’s All Round Efforts Made Him December’s Player Of The Month (+ Fantasy Football Round-up), by Andrew Beasley.

Henderson wasn’t just above his own par level for involvement in moves which led to goal attempts, but also above most of his colleagues. Among Liverpool players who featured for at least 132 minutes in the Premier League in December, only Trent Alexander-Arnold (0.74) and Mané (0.71) were ahead of him, and only by negligible margins. Across the division as a whole, Hendo was joint-11th from the 110 men who had at least 450 minutes to their name. Not bad for a player who has been endlessly accused of only being able to play it safe over the years.

With Liverpool failing to find the back of the net in each of their last three league games for the first time since March 2005, on paper or in digital form, Burnley are hardly the opposition you’d choose to face to boost your goals-for column.

Since Sean Dyche’s side lost 0-5 at Manchester City back at the end of November, they haven’t conceded more than a single goal in any of the subsequent nine matches in the Premier League and FA Cup but they do enter this fixture following back-t0-back 0-1 defeats against Man Utd and West Ham.