In my column last month, I looked at the final standings for various stats I investigated during the 2016/17 campaign. There was one I excluded though, as with some additional info it was worthy of an article in it’s own right.

In January’s column I included a table of Liverpool’s chance creation combinations and shot stats, and so here is the final end-of-season version. The players are sorted in the rows by the total number of chances they created, and then are in the same order in the columns. You can see previous seasons here: 2013/14, 2014/15, and 2015/16. If you would like the below data in a spreadsheet for yourself, it is available here. 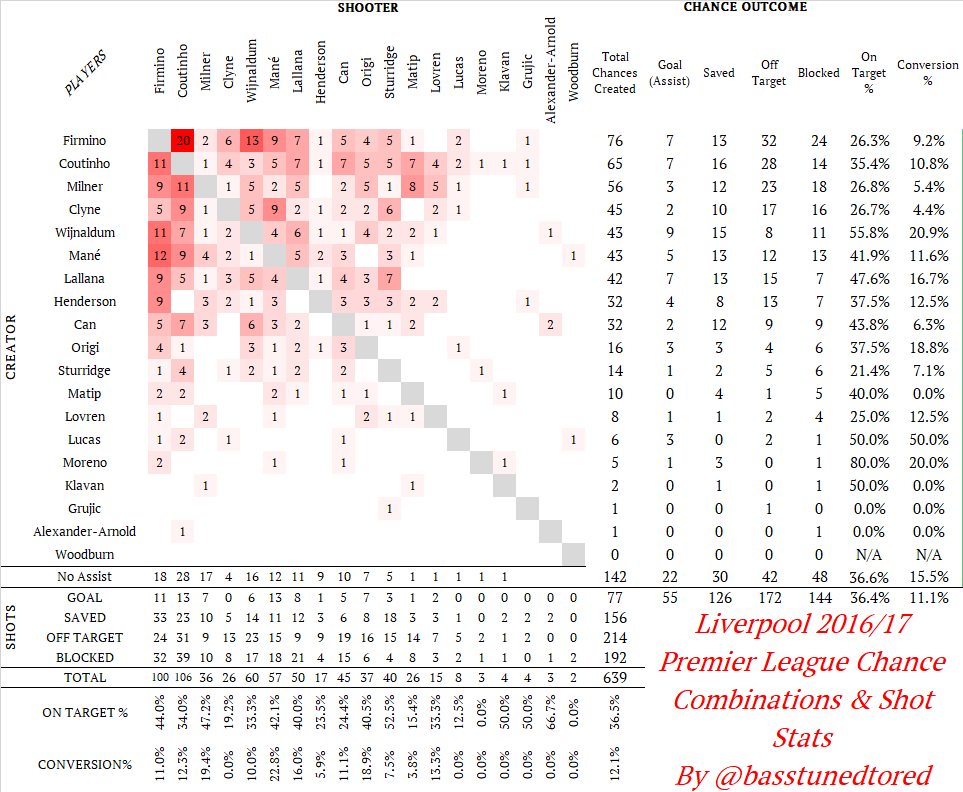 Samira Kumar (Twitter) contacted me about using the data for a vizualisation, and here are the results. 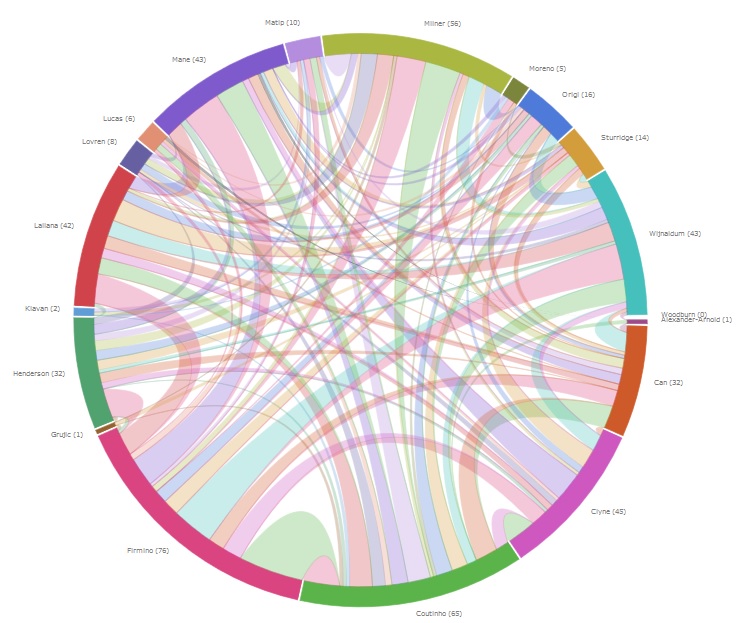 There is an excellent interactive version of this chart here. If you hover over a player’s name it refines the visualization to show you who that player created chances for. Once you’ve finished reading this article, go and have a play with it!

As always with chance combination data, I like to list a few things which caught my eye whilst researching the information, so in no particular order:

As I have chance combination data for the last four seasons, I thought it would be interesting to look at some of these figures across this period to see if anything of note comes to light. Please bear in mind that the 2014/15 figures include six Champions League matches too.

We’ve seen that the top combination this season was a Brazilian pairing, as Bobby teed up Phil for 20 shots. But how does that compare to the most creative partnerships over the last four seasons? Here are the top 20 for that period. 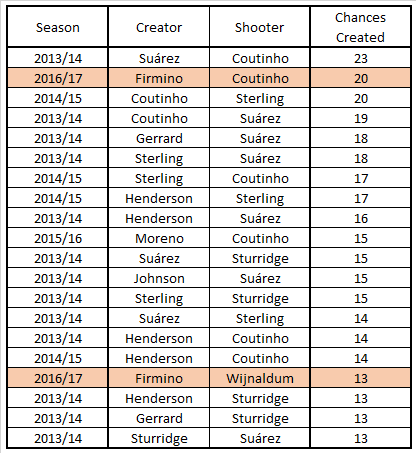 Although this season’s top combo take the silver medal, only one other from 2016/17 makes the top 20. I found it interesting that Suárez and Sturridge appear twice on here with at least 13 chances created in both directions, as the narrative at the time was that they didn’t combine well as a partnership. As can often happen, data has painted a different picture to perceived wisdom.

Considering their reputation as a duo, it’s also surprising that Coutinho and Sturridge don’t appear here, though of course the latter has missed a lot of football due to injuries. The Brazilian has ‘only’ created 25 chances in the league for Sturridge in total in the last four seasons.

Aside from that, hats off to Luis Suárez; he appears on this table more times (nine) than anyone else, despite only being at the club for one of the seasons covered. Indeed, 13 of the 20 combinations listed were from 2013/14, but then Liverpool must’ve created far more chances that year than they have done since, right?

Nope. The amount of chances the Reds have set up has remained very consistent over the past four seasons; the difference between the most and least is just eighteen, which is fewer than one every two matches.

Liverpool had their second fewest combinations of this period last season, but they also used the fewest different players (and wasn’t 2015/16 a massive outlier on that front?). Excluding the two goalkeepers, only two players that Klopp used in the Premier League last season weren’t involved in at least one chance and they (Stewart and Ejaria) only played 24 minutes between them. The above table also heavily underlines how important Coutinho has been over the past four seasons.

Let’s have a look at how the chance combinations transferred into actual goals. Here is the assist combination chart for 2016/17, and this covers all competitions. 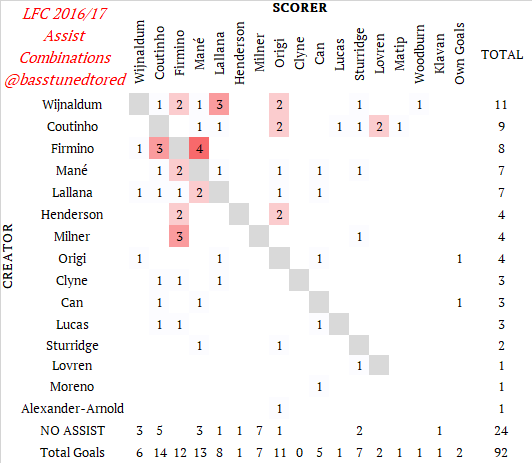 Roberto Firmino only created nine chances for Sadio Mané in the Premier League, yet they resulted in four assists. If we take a look at them, we can see (as if we didn’t already know) how varied in terms of importance to the goal assists can be. From putting a chance on a plate against Watford, to a pass a long way from goal against Everton which had little actual bearing on Mané scoring. 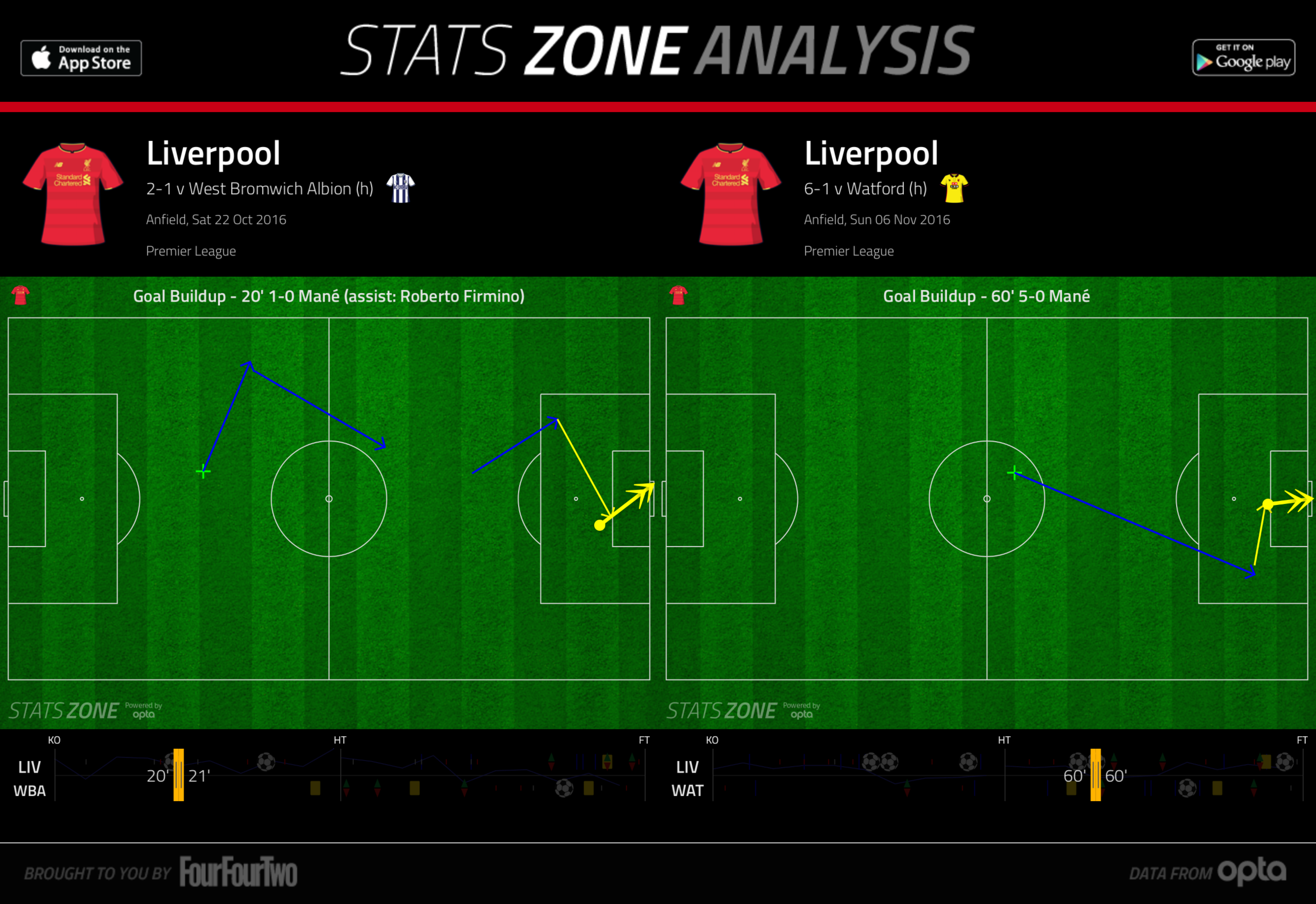 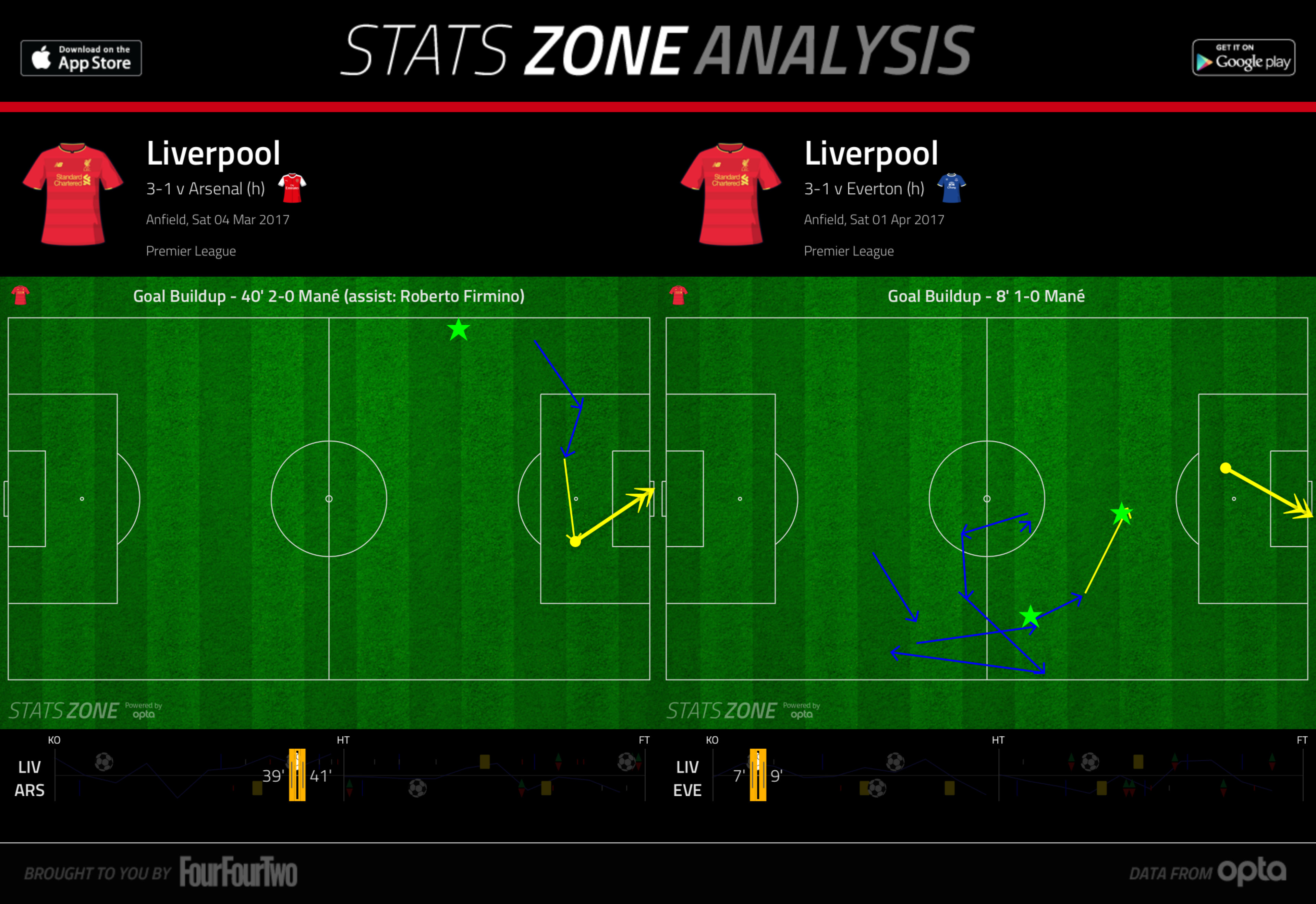 Much like with the best chance creating combos, when we look at assist pairings it is 2013/14 which dominates once again. Here are the nine combinations with four-or-more assists from the last four years. 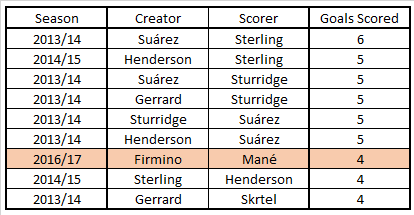 This will sound like a ‘that can’t be true’ fact, but Coutinho and Sturridge have only combined for one more assist across the last four seasons than the Henderson and Sterling partnership chalked up in 2014/15 alone. Phil’s assists for Daniel have certainly featured in some memorable games though, as this table I tweeted during the eventual 4-0 win at West Ham will show.

Coutinho's assists for Sturridge in the PL. 9 in total. 5 in the first 18 months, 4 in the three years since. Won all previous games. pic.twitter.com/JhB4YT70YZ

I recently listened to an interesting Anfield Wrap podcast (here), where Simon Strachan (co-founder of Gain Line Analytics) spoke about the theory of team cohesion, and how that is more important to success than simply buying lots of expensive players.

He suggested that Mohamed Salah may not succeed at Liverpool, and that he was excellent at Roma due to the cohesion of their team. I may not be able to prove or disprove that, but next month I will be looking at how Salah (and hopefully the other signings Liverpool make this month!) might fit into the chance creation framework the Reds already have in place.