By Andrew Beasley (TTT Subscriber Beez). This article will refer to my expected goals system (the full explanation of which can be found here) and my stat benchmarks (which I explained in full here).

August was always going to be a very tough month for Liverpool, as the Reds faced three games away from home, including travelling to play the teams who finished second and third last season. We know how they did in reality, taking four points out of a possible nine, but how did they perform on the expected goals front?

By putting my expected goals figures for each shot from each game into Danny Page’s excellent match simulator (which can be found here, and simulates each match 10,000 times), I can calculate the likelihood that Liverpool would win each match, and how many points they would take on average.

The final two columns on the above table show these results, and we can see that these figures increased from each match to the next in August. It may have seemed counter-intuitive when watching the match to think that the Reds had essentially a fifty-fifty chance of winning at Burnley, but as the home side scored both of their shots on target that obviously made a huge difference; the aforementioned simulator gave a less than 1% chance that Burnley would win that match 2-0 based on the shots both teams had. Even leaving that aside, as I assign a win for any side winning an expected goals battle by more than 0.5, we can see that my system has the Reds unbeaten on seven points.

It’s very early days of course, but let’s take a look at my expected goals Premier League table, and see how it compares to the actual table. 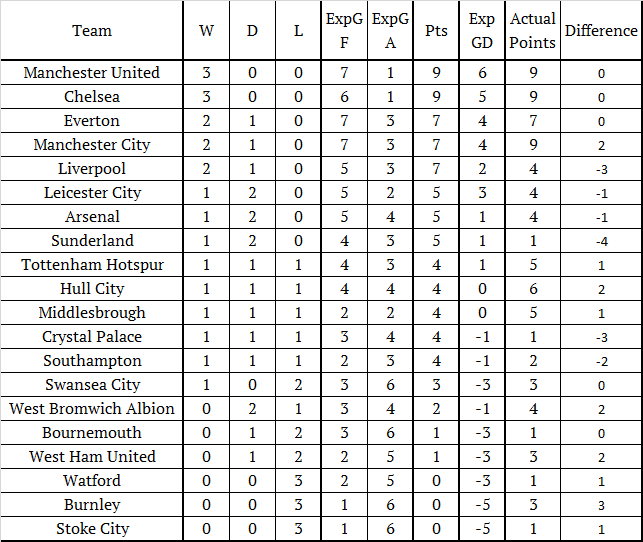 Liverpool are well placed here, and as we know they have three fewer points than their expected goal performances ‘deserve’; only Sunderland are worse off so far (having four fewer than they might’ve expected), and it’s a bit of a sickener to see that Burnley have three more in reality than they deserve, as we know all too well who they got them against.

When I have more data this season, I will also look at how Liverpool’s players are doing against their expected goal tallies, but as Coutinho is the only Red to have had more than two shots on target so far in 2016/17, it would be pointless at this stage. I’ll just mention here though that Coutinho’s shots to date have amounted to 1.93 expected goals, so the fact he has scored two isn’t too surprising.

The rest of this article, including the five best expected goal performances home and away, is for subscribers only.