Given the magnitude of the game and having enough time to rest after the latest league game (three for Villarreal and four full days for Liverpool), both managers went with the best they’ve currently have.

For the hosts the only player missing was centre-back Musacchio (who was only fit enough for the bench following his recent long-term injury) with the only rotation decision being that regular ball-playing midfielder Trigueros was replaced by the ball-winner Pina as captain Bruno’s partner. Everyone else was as per Marcelino’s usual and ‘best’ starting XI.

For Liverpool, Klopp had more absentees, meaning he was largely stuck with the line up he selected. The only – less surprising given the recent selections – choice was that Sturridge was once again kept on the bench, this time with Firmino preferred over him up front. 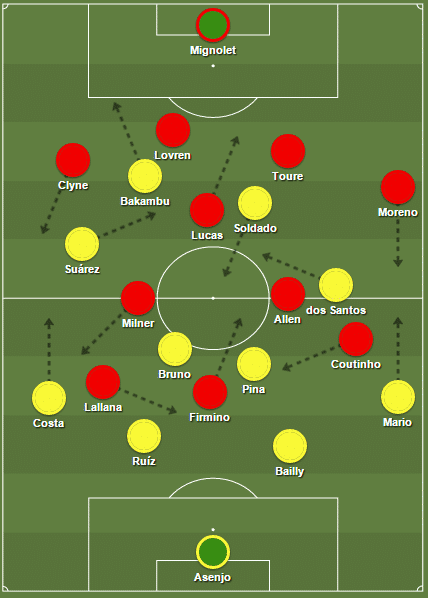 Without going into too much detail (as this isn’t a tactical analysis on them alone), the key points one should know for Villarreal is that they’re yet another Spanish team, not named Barcelona or Real Madrid, that are seemingly part of the new Spanish revolution. For nearly the last decade or so, the Spanish teams have been taken over by the mass tiki-taka hysteria and seemingly played in the same way, simply looking to use possession as the be all of everything they do on the pitch.

But after the initial boom came and went, more and more teams understood that they simply don’t have the resources – and indeed the quality of players – to do ‘a Barcelona’ and just pass their way to the top. Then came the Atletico Madrid revolution, showing the way to compete in a division that hugely favours the big two is to be much more tactically organised and play the underdog way.

After their brief period when they were labeled as the ‘mini Barcelona’ during the Pellegrini years, recently – and especially since the appointment of their current manager Marcelino in January 2013 – the Yellow Submarine are more like Atletico-lite, than anything resembling the peak Barcelona years.

Similarly to Simeone, Marcelino has his team extremely well organised with a clearly defined structure in all phases of play. The players work incredibly hard in and out of possession and stay compact, with minimal distance between the lines no matter whether they are attacking or defending.

In simple terms, Villarreal defend in very deep and narrow two banks of four with the forwards often dropping deep to often make it look like a 4-6-0, especially if the opposition likes to keep the ball and attack in a more patient and methodical way. As a result, Marcelino’s players completely close off all spaces through the middle and funnel the opposition down the flanks where sudden and well-timed pressing activities are being applied.

In attack, the team has kept a link to the golden Pellegrini years and are resembling more of a 4-2-2-2 formation with the two wide men being the type of wide playmakers that drift infield and influence the play between the lines rather than typical wingers that would bomb down the flanks and whip crosses into the box.

Intriguingly, for a team that doesn’t really care about possession and endless passing combinations, Villarreal’s first-choice midfield unit consists of two quality ball-players who like to dictate the play and provide incision. It’s just a case of Bruno doing this from just in front of the back four while Trigueros’s preferred area of action is a bit higher up.

Similarly to the midfield pair, the front duo is also split in terms of their movement and roles. Soldado, a former limited poacher in his younger years has recently developed into a more rounded centre-forward who does a job similar to a floating advanced playmaker: he roams around across the whole final third before looking for ways to either take part in inventive passing moves or directly feed his partner. In contrast to a typical Spanish #10 though, Soldado is doing his playmaking job relying more on smart movement and accurate passes, rather anything overly elaborate or too fancy. Often, he also does the job of a typical target man – receiving the ball with his back to the goal before sending a well-timed knock-down or lay-off for an onrushing teammate.

His partner, Bakambu, has a simpler role but arguably even more efficient (evidence is 20+ goals in all competitions this season). With Soldado providing the link up with the midfield four, Bakambu’s is focused on simply prowling the channels and making himself available for a well-timed killer pass.

Despite Villarreal looking exactly the same, at least shape-wise, to the golden Pellegrini side, the difference that the current version of the team displays is that they don’t care as much about dictating the game via possession and put bigger faith in how they control the game positionally, safe in the knowledge their defensive structure and counter-attacking abilities will make the difference at both ends.

Marcelino’s decision to replace his secondary midfield playmaker and pair Bruno with a typical ball-winner was a telling one too. The manager made a clear defensive-minded choice, presumably wanting to solidify his midfield zone in case Liverpool were going to start with their usual fluid 4-2-3-1 that sees no less than three roaming attacking midfielders looking to play between the lines.

A Doctor at Hillsborough, by Neil Dunkin

The Week That Was: Justice at Last for The 96