It’s the day after Liverpool’s frankly embarrassing 6-1 drubbing at Stoke; what feels like the lowest league point in years. It is on this Monday in 2015 that you meet a mischievous mystic in possession of a crystal ball – but obviously, being rational, you don’t trust such people.

Still, they tell you that Raheem Sterling will get his wish and leave Liverpool; pointing out that a big portion of the fee is spent on Christian Benteke, who won’t make the kind of impact hoped for, and with only the occasionally good game, scrapes just eight league goals. He’s not a lost cause, but still underwhelms. Lazar Markovic, who may have had the quality to replace Sterling, is loaned out for the season.

Jordon Ibe, who at one point had looked like being Sterling’s heir apparent, seriously loses his confidence, and a talented player becomes painful to watch. Aged just 20, he becomes a whipping boy; a scapegoat to people who can’t spell scapegoat. (The kind of people who’ll call him an escaped goat.)

Brendan Rodgers gets to keep his job after a difficult summer, but at least he will overhaul his underwhelming coaching staff. As his second in command brings in … Sean O’Driscoll. Steven Gerrard leaves for America, and in his place comes James Milner. 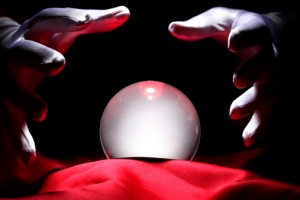 The good news is that the Reds still have Daniel Sturridge, whose hip has been successfully operated on. The bad news is that he will still start only four games before mid-February, due to several other injuries. The Brazilian Roberto Firmino will arrive from Hoffenheim, but will take until late November to score his first goal.

In comes the likeable Danny Ings, who hits the ground running, with a respectable three goals in eight games, but by the autumn his season is over; he may play again by May, if he’s lucky. Another new buy, young Joe Gomez, looks like a top-class defender in the making, and like Ings is one of the only bright sparks of the early months. By the autumn his season is over. It all sounds a bit fishy.

Divock Origi will have a difficult start, having arrived with the ludicrous L’Equipe tag of the worst striker in Ligue Une last season (when he was 19), and finding himself behind Benteke and Ings in Rodgers’ pecking order (and Sturridge too, when he’s briefly fit). But just as the young Belgian is looking the part in December, he will suffer a hamstring injury. Indeed, halfway through the season there will be eleven hamstring injuries virtually all at the same time. Before the end of the season the fitness coach will depart.

Origi will return, and briefly look unstoppable, before an Everton player stops him, almost for good, with an obscene tackle. Season over.

As of the start of May, not one single Liverpool player will have scored as many goals in the season as Iago Aspas has in Spain, and Leicester’s hopeless journeyman, Jamie Vardy, will notch more than twice as many league goals as any Red. By the halfway stage, regular attacking starter Adam Lallana won’t have registered a goal or an assist.

In total, Liverpool will field ten different captains, and use almost 40 different players. Two whole sets of first-team coaches will be sacked by October. The Reds will start a Premier League game with a midfield that has an average age of 19, and the youngest average overall age for an XI since March 1971.

It all sounds rather concerning, doesn’t it?

Reinforcements will be sought in the January window, but the two players signed will not arrive until the summer of 2016, so cannot provide any immediate help. Another centre-back is brought in on loan, but he’ll only play a couple of times … as a centre-forward.

Still, there’s the super-fit Jordan Henderson, impervious to injury, right? In August he will be sidelined with plantar fasciitis, a painful heel condition that cannot be treated, and has to heal of its own accord, which usually takes months. In addition, in September he will suffer a metatarsal fracture; both of which means that he will start just two games before December. Upon his return he will play with the painful heel condition, which clearly affects his form. Still, in April he starts to look his old self – at which point his knee ligaments will be damaged, and his season effectively ended.

You are told that after eight games Liverpool will sit 10th. Doesn’t bode well for Rodgers, says the mystic. After the end of the previous season, it’s hard to argue that it’s time to part company.

Despite that, Simon Mignolet will continue to be his usual mix of good saves and improbable mistakes (no psychic powers needed there), and be voted by one newspaper as the worst keeper in the Premier League. Adam Bogdan will come in to challenge Mignolet, or at least to improve upon Brad Jones; and in his first league game he’ll drop a simple corner, which leads to the Reds being drubbed 3-0 at Watford. Soon after he’ll get beaten directly from a corner at fourth-tier Exeter, who the Reds can’t beat on their patch.

Early in the season Liverpool will lose 3-1 at Old Trafford, and get beaten 3-0 at home to West Ham. Fourth-tier Carlisle will take the Reds to penalties at Anfield, meaning that in two games against fourth-tier opposition (the second coming in the FA Cup), the Reds win neither in normal time (although the good news is that Exeter are beaten in the replay).

Dejan Lovren will be so terrible in that West Ham game that he looks like he’ll never don the red shirt again. Still, Mamadou Sakho will emerge as a leader … then fail a drugs test.

Martin Skrtel will look hopeless, like a boxer who’s taken too many punches, and lost too many fights. Lucas Leiva and Kolo Toure will become more trusted at centre-back than him. Spurs’ full-back reject Kevin Stewart will play quite a few games in central midfield.

So far, how’s this looking? To me, it all sounds a bit far-fetched.

The atmosphere at Anfield will get so bad that in one game a third of the crowd will walk out well before the end, albeit over ticket pricing rather than the performance. That day Liverpool will throw away a two-goal lead against their relegation-threatened opposition, with a goal scored by a man who has admitted sexual improprieties with a minor, and not been sacked.

By the start of May, Liverpool will find themselves over 20 points behind Leicester City, and well behind West Ham. They’ll see a point at home to Spurs as a good result. Rafa Benítez, meanwhile, is now the manager of Newcastle. Put like that, it can only mean that the Reds are being relegated. Twenty points behind Leicester?

Pretty much nothing good occurs in Rodgers’ 11 matches in all competitions; his team only scoring more than one goal on one occasion, against the bottom side. Otherwise it’s ten ones or zeroes in the ‘scored’ column. The Reds are exactly mid-table when the axe falls.

So, what stops the season looking like a total disaster?

Enter Jürgen Klopp. The German cannot be said to be lucky, inheriting the litany of problems outlined above, and encountering all manner of weird circumstances, not least two cruciate ligament injuries in his first week; goalkeepers who cannot catch a ball; the first ever mass-walkout at Anfield; a record-breaking string of hamstrings; and the first time a Liverpool player is found to have taken a substance on the ‘banned’ list. And he’ll only have the goal-shy squad he inherited to work with.

Within months of arriving, Klopp will lead Liverpool to a Wembley final against Manchester City, with the teams inseparable until a penalty shootout. In early May, the Reds will be in a European semi-final, with a narrow 1-0 deficit to Spanish opposition, and the second-leg to come at Anfield. (They mystic doesn’t reveal the outcome, but does point out that Liverpool have won eight of 13 European ties set up in the manner.)

Klopp’s Reds will win 3-1 at Chelsea and 4-1 at Manchester City, and also beat City 3-0 at Anfield. They’ll thrash Southampton 6-1 at their place, and go to Villa Park and win 6-0. They’ll put four past Stoke, and win 5-4 at Norwich. They’ll even win games against Premier League opposition when he fields the B-team (although not at Swansea, unfortunately).

The German’s Liverpool side will also put four past Everton in the most one-sided derby in living memory, with 30 more shots on goal than are registered by the visitors. His side will go to Crystal Palace, where the Reds’ dreams are usually shredded – and, one-nil down at half-time, and with James Milner sent off, will, for the first time in the club’s history, go on to win from such a position.

Best of all, his side will knock out Manchester United from the Europa League, by a clear 3-1 margin that should have been greater, and despite going two goals down within ten minutes to his ex-Dortmund side at Anfield, and falling behind 3-1 in the second half, the Reds will beat them 4-3 on the night. Dejan Lovren will finally head a ball straight. It will be one of the great European nights, despite so much tough competition for the honour over the years.

All this, despite the problems outlined above. If it sounds like a tall story, it’s important to remember that the modern Liverpool FC don’t make things easy. Of course, the mystic’s insistence that Leicester will be top and Chelsea 10th undermines the whole scenario. If you were a betting man, you’d dismiss the whole concept at this point. (You certainly wouldn’t want to have been sticking to your par argument from May 2015.)

And yet whether you think this makes for a terrible season, a great season or a mixed season, the news will come – at long last – that the 96 deaths at Hillsborough will officially be blamed on the police and emergency services, who also will be shown to have covered up what happened. Crucially, the fans will be totally exonerated from blame.

If nothing else comes from this season, then that’s more than enough. You don’t need a mystic to tell you that.

A Doctor at Hillsborough, by Neil Dunkin