With Sakho left out due to the breaking doping issue, Clyne being ill, Lucas already starting the previous two games after his long injury lay-off and Origi now injured, Klopp was always going to have to make some changes for this game. In came Toure, Randall, Allen and Sturridge. Benching Coutinho and replacing him with Stewart was the only unenforced rotation applied.

More significantly though, Klopp made the decision to change his usual 4-2-3-1 formation and go for something he didn’t use in a very long time – the 4-diamond-2.

As for Newcastle, Benitez didn’t make a single change in his starting XI, keeping his trusted 4-2-3-1 formation intact. This wasn’t really surprising, given how the Geordies performed in their previous game against Man City. 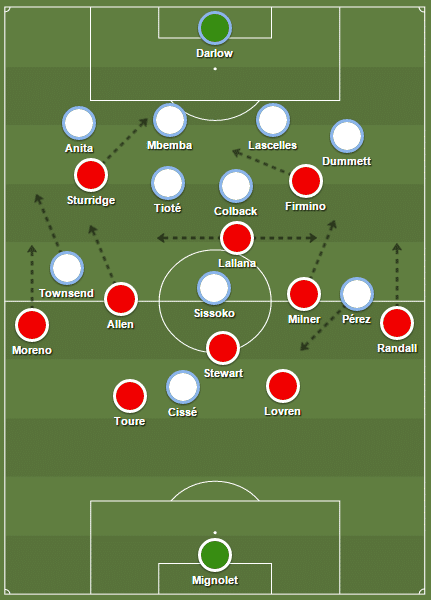 In a way Benitez had a tougher job on his hands when it came to tactically preparing his side for this particular game, mainly because it wasn’t really clear whether Klopp would stick to his A team (bar any enforced changes) or choose to rotate ahead of the crucial Europa League game. Hence the Spanish manager wouldn’t have been sure of Liverpool’s potential starting XI and formation so to be able to drill and instruct his players in as much detail as he without doubt would’ve liked.

However, with the Everton game proving not to be such a test for Liverpool and there being no less than four full day for rest between the Newcastle and Villarreal games, it was always more likely for Klopp not to rotate his side as much as he previously did for the Stoke and Bournemouth games.

With this in mind, the visitors lining up with the same 4-2-3-1 as the Man City game was the safety option. With Colback and Tiote, Benitez could count on the solid double presence of two defensive-minded players to shore up the zone between the lines and not give up too much space for Liverpool’s trio of roaming attacking midfielders. In addition, with Dummett and Anita on the flanks – a centre-back and a holding midfielder by trade – the Spaniard was going with two players who can easily tuck infield and defend narrowly to further tighten make the defensive unit. 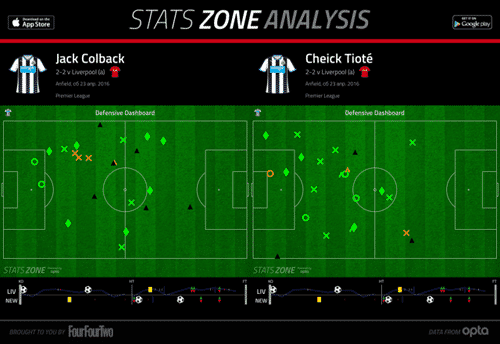 There was a slight change in Benitez’s approach from the game against Man City though. While against the Citizens the Geordies’ wingers were instructed to also tuck infield and help further compress the space through the middle – perhaps Benitez wanted to minimise City’s midfield presence as much as possible – here, Perez and Townsend were obviously told to stay wider and pick up Liverpool’s rampaging full-backs.