With both teams rotating heavily for their weekend games, it was unsurprising they returned to using their  ‘best available’ for this game. The only surprising calls were that Sturridge and Allen remained on the bench for Liverpool while for Everton Deulofeu was again out of the starting XI. 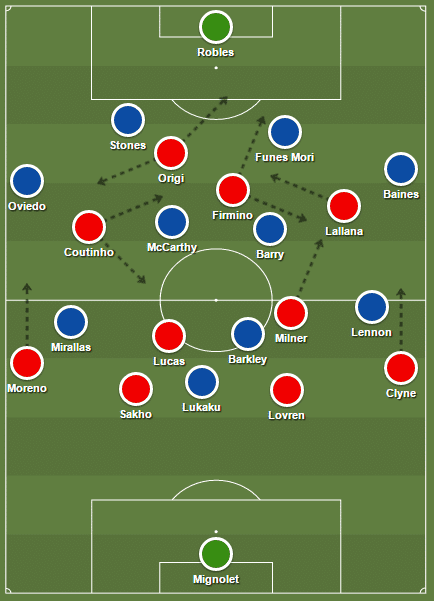 On current form – performances and results-wise, having a number of players ‘on fire’, with a level of confidence and belief etc – there was only ever going to be only one winner (if the game was the type of open and free-flowing game with both teams pouring forward and attacking each other). This, combined with the fact that Liverpool were always most likely to name their ‘best’ XI following the heavy rotation applied in the Bournemouth game – meaning Klopp’s XI and possible approach was more predictable – implied the onus was on Martinez to tinker with his side tactically and come up with a suitable gameplan to level the playing field and make the game more of a battle.

There were two main options available to the Spaniard. They were identical regarding the midfield configuration but with a clear and very important difference up top.

One of the main dangers of this Liverpool side is when Klopp fields his usual fluid 4-2-3-1 formation, the ‘3’ behind the lone striker is a hugely roaming unit who all look to influence the play centrally and overload that zone between the lines. Tactically, this means it’s often a huge risk to play with only one recognisable holding midfielder or with a midfield pair where one of the players have a clear weakness that impacts his ability to defend that zone and nullify the threat of Liverpool’s roaming trio.

Martinez could have guarded against this by changing his usual 4-2-3-1 to more of a 4-1-2-3 (that plays out as a flatter 4-5-1 when out of possession) with the view to have three players tasked to defend the zone ahead of the back four. Using Barry as the deepest and central midfielder would have helped the Blues regarding their ability to play the ball out safer and facilitate passing moves higher up, something surely needed against the expected Liverpool’s counter-press.

Meanwhile, including Besic in the starting XI as the third midfielder would have naturally beefed up the midfield unit and increased the chance to see Barry’s lack of mobility being mitigated better with two battling and energetic players either side of him.

Up front, the first option was to use two pacy wingers who can stretch the play and target the space left behind Liverpool’s marauding full-backs to act as the additional counter-attacking outlet while Lukaku as the all-round threat who could threaten in a variety of ways: get in behind, drift wide to receive diagonal balls, drop deep to receive long balls and bring others into play. 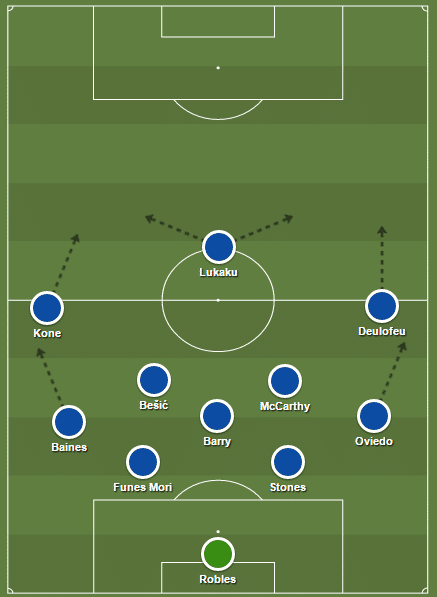 The alternative variant was to use the same midfield unit with the view to solidify that space again but with the difference being that instead of a ‘wide’ 4-1-2-3, play a deliberately lopsided 4-1-2-3. Here, there would be only one pacy wide man, who would look to stay wider and open up the playing field to allow for a different outlet in possession. On the other, Barkley could’ve been used in a narrow position with the view to continually drift into deeper and narrow positions to offer even greater midfield presence and increase the chance to cope with the incoming press but also enable his side to try and at the very least rival, if not boss, Liverpool for possession dominance. 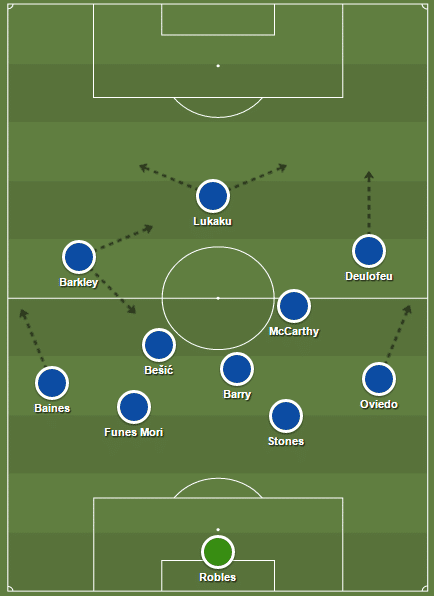 Martinez throwing away the game tactically

But Martinez did none of this as he simply continued with his usual 4-2-3-1 formation. Surprisingly, in contrast to the majority of the times he used this formation in the past couple of years, neither of the wide men usually drift infield to offer that additional midfield presence. Instead there were two natural wingers selected – Lennon on the left and Mirallas on the right.