For this game Pardew had to make a few changes to his starting XI, which had been relatively consistent recently. In goal, Hennessey was replaced by McCarthy (making his first start since the end of August) due to a minor injury. In defence, Souare was welcomed back from suspension, so Kelly dropped out. Up front, an injury to Wickham (4 goals in the last two games) meant a start for Adebayor The only tactical decision for Pardew was to replace Mutch with Ledley.

For Liverpool, Klopp made only two changes following the mid-week game against Man City. This time it was Flanagan (not eligible to play in the Europa League) and Moreno at full-back, with Clyne being the one to receive a bit of a rest and remain on the bench. The other tweak saw Sakho coming in for Toure. 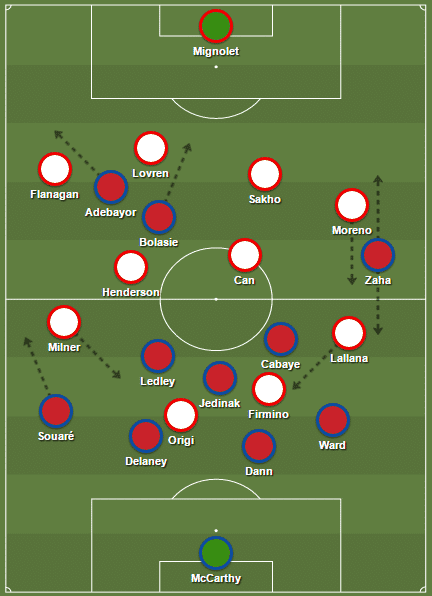 After starting the season by playing more often than not in a 4-2-3-1 formation, in recent months Pardew has switched to more of a 4-1-4-1 (perhaps coinciding with the injuries to Sako and especially Puncheon, two of the usual front quartet in the early months). Here, the former Newcastle manager kept the 4-1-4-1 formation but made a couple of intriguing tweaks.

The first one involved personnel. The only unenforced change to the starting XI was to replace the positionally indisciplined Mutch with the defensively aware and very reliable Ledley. Surely, as part of his preparation for this game, Pardew was watching Liverpool’s last few games and was worried about their lopsided 4-2-3-1 formation and the extra presence it provides between the lines. It was this tactical element that ran riot in the games against Aston Villa, the league clash against Man City and the second leg against Augsburg. As a result, clearly Pardew wanted someone who could slot in next to Jedinak, help shore up the space between the lines and leave as few gaps as possible over there for Liverpool to exploit.

The other change was purely on a tactical level as the recent 4-1-4-1 formation gave way to what was here not only ‘broken’ but also ’tilted’ clearer 4-3-3 shape.

The rest of this analysis is for TTT Subscribers only.

The Week That Was – Friday March 4th