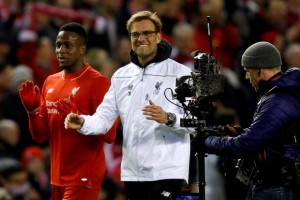 Liverpool will look to seal their progress to the quarter-finals of the Europa League on Thursday evening – 8.05pm kick off UK time – when they take a 2-0 lead from the first leg into the last 32 second leg tie at Old Trafford. Liverpool have had a full week to prepare for this match while the Red Devils were in FA Cup quarter-final action at the weekend, drawing 1-1 at home to West Ham.

Manchester Utd can look back on three previous occasions where they have recovered from a 2-0 first leg deficit to progress. The first was the 1963 Cup Winners’ Cup tie against Spurs which they lost 2-0 at White Hart Lane before winning 4-1 at Old Trafford in the second leg. They repeated the trick in the same competition during the 1983/84 season, this time losing 0-2 at Barcelona in the first leg before progressing with a 3-0 win in the second leg. More recently they overcame a 0-2 first leg defeat during the 2013/14 Champions League campaign against Olympiacos in Round 16 by once again winning 3-0 at Old Trafford in the second leg.

Out of 33 previous ties across all cup competitions where the Reds have taken a two goal lead or more into the second leg, only Inter Milan – with a 3-0 win in the 1965 European Cup semi-final second leg – have successfully overturned a two goal deficit against Liverpool to progress. Following a 0-2 defeat at Anfield to Liverpool during the 1966/67 European Cup at the second round stage, Romanian side Petrolul Ploieşti recorded a 3-1 win in the second leg in Romania which sent the match into a playoff, which Liverpool won 2-0 at Heysel.