Capital One Cup finalists Liverpool travel to the King Power Stadium on Tuesday evening– 7.45pm kick off UK time – with Claudio Ranieri’s table topping Leicester knowing anything but a defeat will see them enter February top of the league. 13 points separate Leicester and Liverpool in 7th but the Reds  were the last team to defeat the Foxes in the league when we won 1-0 at Anfield back on Boxing Day thanks to a goal by Christian Benteke. Arsenal are the only other side to have taken maximum points from Leicester in the Premier League this season when they won 5-2 at the King Power Stadium in September.

Unlike Liverpool who are still in all three cup competitions, Leicester can now solely focus on their challenge for the league title following their FA Cup third round exit to Spurs in a replay, losing 0-2 at the King Power Stadium. Following the visit of Liverpool, the Foxes travel to both Manchester City and Arsenal in consecutive league games, and if they are still top following the match against Arsenal, a lot of doubters will surely be turned into believers.

Five teams have prevented Leicester from taking maximum points at home this season with, as mentioned above, Arsenal the only side to inflict a home defeat on the Foxes. Tottenham (1-1), Man Utd (1-1), Man City (0-0) and Bournemouth (0-0) are the other teams to leave the King Power Stadium with something to show for their efforts. The draws with Man City and Bournemouth (as well as the defeat to us at Anfield) are the only times the Foxes have failed to score in the league this season, while at the other end they’ve kept seven clean sheets: four at home and three on their travels.

Liverpool have won five times away from Anfield in the league this season (only Arsenal with six and Leicester with seven have won more) but still sit on -1 goal difference away from home (-2 overall). We’ve also kept seven clean sheets in the Premier League with four of them coming away from home and three at Anfield.

Liverpool’s record against teams managed by Claudio Ranieri (all competitions): 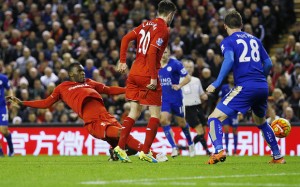 The Foxes have a doubt over Schlupp (hamstring).