Despite all the talks of wholesale alterations being made in formation and personnel, McLaren went into this game with only one change from the thrashing at Palace the week before. De Jong, making his first start of the season, replaced Perez along with Cisse in attack.

Meanwhile, as expected Klopp made several changes to his line-up after the midweek Cup game. Mignolet, Clyne, Milner, Firmino, Ibe and Benteke were recalled to the starting XI. So it wasn’t surprising to see Liverpool in a new formation, a 4-2-3-1 replacing the diamond formation used at Southampton. 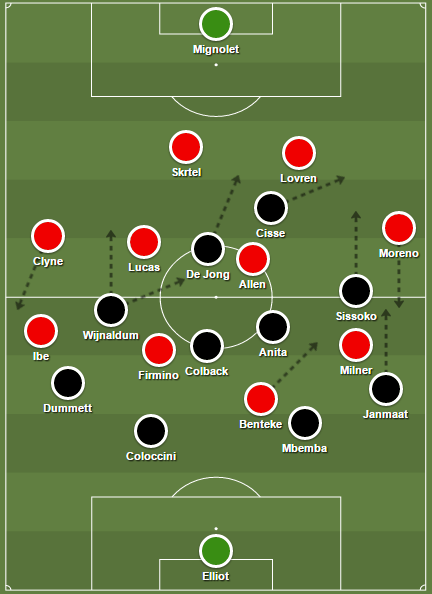 In a match against a team low on confidence and form (five league wins in the whole of 2015 up to now), the worst thing to do from a strategic point of view is to give them the chance to find their feet by going easy on them. But that’s what Liverpool did in this match.

Such a strategic decision had clear psychological and tactical implications for both sides. By starting passively, with a slow tempo, low on pressing and overall aggression in their general play, Liverpool basically let Newcastle off the hook. Instead of putting them under pressure in and out of possession right from the start to increase their woes and add to their misery to the point of that they crumbled, the Reds gave their hosts time and breathing space to gradually settle into the game and gain that invaluable sense of belief that if they follow their manager’s game plan all is not lost and there is still everything to play for.

It would be wrong to attribute Liverpool’s lack of pressing from the start to either fatigue or having Benteke up front. Klopp’s sensible rotation in midfield and attack over the last few games helped protect his team from tiredness. The latter suggestion is as right as to say that you can’t play attacking football (or attack properly) if you don’t play with a typical centre-forward up front. In modern football there are plenty of tactical ways to get around such preconceptions.

Liverpool - The Questions of Quality and Consistency