The Week That Was – Friday 13th November

The Week That Was – Friday 13th November

Jurgen Klopp says he felt “alone” at Anfield in the closing stages of the 2-1 defeat by Crystal Palace. (BBC Sport video)

“Eighty-two minutes – game over,” said Klopp, after his first defeat as Liverpool boss.

“I turned around and I felt pretty alone at this moment. We have to decide when it is over.”

“I am not disappointed about this, the fans leaving, they have reasons,” said the German. “But we are responsible that nobody can leave the stadium a minute before the last whistle because everything can happen.

“Between 82 minutes and 94 you can make eight goals, if you want, but you have to work for it.

“That is what we have to show and we didn’t.”

But the winger says he and his teammates won’t be using their midweek Europa League exploits as an excuse for their first loss under Jürgen Klopp.

Ibe believes a lack of composure was to blame for the result, rather than any tiredness in the legs.

“We played alright and we created chances to get the goals but it just didn’t come today.

“[The manager] just told us to keep our composure because it shouldn’t be an excuse having a midweek game.

“We didn’t start the best, it’s just improving on that and starting from the first minute, keeping the ball, keeping composure, building into the game and trying to win.” 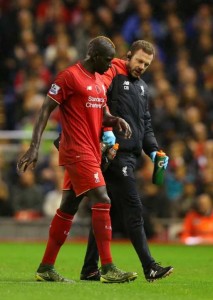 The defender was forced to leave the pitch shortly before half-time against Crystal Palace due to an awkward fall after an aerial challenge.

And the centre-back will now not be involved in France’s upcoming friendlies with Germany and England.

Mamadou Sakho has been ruled out for eight weeks after suffering a knee ligament injury against Crystal Palace on Sunday.

Mario Balotelli may require surgery on a troublesome groin injury.

The 25-year-old, who has made only four appearances since re-joining Milan on loan from Liverpool earlier this season, has been sidelined for over a month with the problem and travelled to Denmark on Monday for a consultation with a leading specialist.

AC Milan said in a statement: “The medical staff of AC Milan and Liverpool FC will soon agree on which treatment the player will undergo.”

Ex-Liverpool manager Brendan Rodgers is spotted by Twitter users wearing a suit on the London Underground, prompting speculation he could be set for a job interview.

Or just prompting speculation that he was in London whilst wearing a suit.

The Football Association confirmed that James Milner has withdrawn from the England squad due to injury.

Results of a vote reveal that the majority of participants want Liverpool manager Jürgen Klopp to improve the wing positions in the team. (Liverpool Echo)

Pep Ljinders explains some of the aspects of Klopp’s approach to coaching, and his tactical set up:

Sheyi Ojo, currently on loan at Wolves, has returned during the international break to give Klopp a chance to look, first hand, at some of the younger players out of loan:

“He seems like a really nice manager and he wants to help all of the players,”

“He’s just said to me to keep my head down, keep working hard and obviously we’ll just see what the future holds.

“I think he’s come to see me a couple of times which is nice to hear and hopefully I can keep on improving and keep on doing well.

“With the right guidance I think I can do well in this team. I’m still learning and I’m still young so I’ll just see how it goes and see what the manager wants me to do.”

“Ibe went out on loan last season and then got recalled back so it goes to show that if you do well on loan you get the chance to be called back and go straight into the first team.

“That’s my main aim to keep doing well and I do get the call back, I just need to impress the manager.

“I’m learning now at Wolves and getting more experience but the main aim is to come back and impress the manager, and hopefully I can start playing for Liverpool on a regular basis.”

There’s only one current Liverpool player who will play in a competitive international during this break, and that is Adam Bogdan:

The Reds keeper will hope to help his country get past Norway and secure their place at Euro 2016, with a two-legged tie kicking off in Oslo on Thursday before the return fixture in Budapest on Sunday.

The remainder of Jürgen Klopp’s squad who have been called up for international duty will take part in friendlies during the break.

The Week in Football – General

Former Argentina midfielder Simeone is already planning transfers as he prepares for a summer switch to Stamford Bridge. (Daily Mirror)

David Moyes was sacked as manager of Real Sociedad, along with his assistant Billy McKinlay.

Man City’s Head of Elite Development Squad Patrick Vieira is taking over at New York City – where he’ll link up with Frank Lampard.

Leaving Early - the Debate on TTT