Jürgen Klopp became the first Liverpool manager since Bob Paisley not to lose any of his first five games in charge with the 3-1 victory over Chelsea at Stamford Bridge on Saturday. His record as Liverpool manager now reads two wins and three draws, with a trip to Russia up next in the Europa League to face Rubin Kazan at the Kazan Arena on Thursday; 6pm kick off UK time.

Both sides can still qualify from Group B with the Reds in second place with three points following three draws (four points behind leaders Sion), while Rubin Kazan are bottom with two points, below 3rd placed Bordeuax who also have two points and a minus one goal difference. Rubin will be looking to continue their 100% record against English opposition in Russia, having previously defeated Wigan, Chelsea and Tottenham. 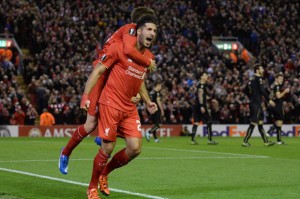 The two sides played out a 1-1 draw at Anfield two weeks ago with Rubin taking the lead through Marko Dević before Emre Can tied the scores, which is how the match finished despite Rubin being reduced to ten men following Oleg Kuzmin’s dismissal. Following that draw Liverpool have drawn one and won two in the League Cup and Premier League, while Rubin have lost one and won one in the Russian Premier League, both away from home.

This will be Liverpool’s 15th meeting against Russian/USSR opposition with our first encounter coming during the 1979/80 season, where we faced Dinamo Tbilisi in the first round of the European Cup. The Reds claimed a 2-1 victory at Anfield in the first leg but went down 0-3 in Russia, exiting the competition 2-4 on aggregate. The 1992/93 Cup Winners’ Cup was the stage for our next meeting with a Russian side, this time Spartak Moscow were the opponents in round two of the competition. The Reds went down 2-4 in Moscow and 0-2 at Anfield, losing 2-6 over the two legs.

Three years passed before we faced our next Russian opposition, with Spartak Vladikavkaz the opponents in the first round of the 1995/96 UEFA Cup. The Reds won 2-1 in Russia and played out a 0-0 draw at Anfield to progress to the second round. Ten years after Spartak Moscow handed Graeme Souness’ Liverpool a European lesson, Gerard Houllier’s Reds had the chance to set the record straight in the 2002/03 Champions League Group Stage where Liverpool were drawn to face Basel, Valencia and Spartak Moscow. Liverpool thrashed the Russians 5-0 at Anfield and 3-1 in Moscow but it wasn’t enough to progress further in the competition with Valencia and Basel finishing ahead of the Reds in their group.

Liverpool once again faced CSKA Moscow in 2005 in the European Super Cup in Monaco with Rafa Benitez’s European Champions winning 3-1 against the UEFA Cup holders.

Anzhi Makhachkala were our next Russian opponents in 2012/13 in the Europa League group stages, with Brendan Rodgers’ side winning 1-0 at Anfield but losing by the same score in Russia. The Reds progressed to the last 32 of the competition that season only to face another Russian side – Zenit St Petersburg – who eliminated the Reds via the away goals rule having won 2-0 in Russia with Liverpool winning 3-1 at Anfield in the second leg.

Klopp - Reversing the Laws of Gravity

The Normal One 3, the Petulant One 1