Liverpool will banish any thoughts of their previous visit to the Britannia Stadium when they start the season at Stoke City this weekend, insists captain Jordan Henderson. (LiverpoolFC.com)

“There couldn’t be a better place for us to start and put what happened there last season to bed once and for all,” said the midfielder.

“The lads who were playing that day will remember it for quite some time. It was a horrible day for everyone involved.

“We have a determination to do better and to improve as a team. We are focusing on the future and that is the first game at Stoke. They are a good team but so are we.

“We will be stronger with the new players that we have got. We are a young team but we have brought in quality. I think the quality we have added will make a big difference.

“We have got a lot of character in the team. What happened there last year will only make us stronger. We have got to put it to bed.

“This is a new season, a new start. I think this is a really exciting time. We are quietly confident but we have just got to make sure that we go there, put in a proper performance and get a good result.”

Christian Benteke has today been confirmed as Liverpool’s new No.9. (LiverpoolFC.com) 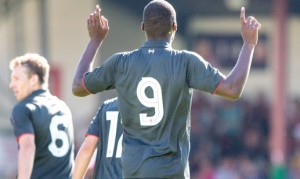 …and Christian Benteke is Liverpool’s No.9 … OK so it doesn’t scan …

Midfielder Joe Allen went off early in the friendly at Swindon with a hamstring problem which will require a scan on Monday.

“I think Joe was his hamstring, unfortunately, so that doesn’t look so good for us,” added Rodgers.

Mario Balotelli has been pictured on Instagram with a hawk.

Liverpool fans’ support for the club was recognised with a prize at the Football Association’s Respect and Fair Play Awards on Sunday. (LiverpoolFC.com)

The awards acknowledge the commitment of individuals, clubs and administrators to promote respect and fair play across all levels of the game.

And the behaviour and passion of Kopites was celebrated at the Wembley ceremony as the Reds were presented with the Premier League Supporters Award.

The Season Ahead - The Way We See It Part 2