Both teams missed important first-team players, with Arsenal’s loss arguably the greater. Liverpool were without their captain Jordan Henderson and Adam Lallana but their replacements – Lucas and Firmino respectively – played important roles in creating a different outlook which arguably suited the game more.

After using a lopsided 4-2-1-3 for the previous two games, here – arguably due to the change from Henderson to Lucas – Rodgers opted for a 4-1-2-3 formation instead.

Arsenal lost their first-choice centre-backs. Not only did their understudies simply not have the level of understanding and cohesion Mertesacker and Koscielny have forged in the past few years, but neither looked able to compete with the all-round threat of Benteke. Chambers is a lightweight defender who used to play at right-back, while Gabriel is more of the opposite to Koscielny, preferring to sit back and sweep in behind instead of quickly stepping up and aggressively engaging the opposition.

This meant there was no a like-for-like replacement to the Mertesacker-Koscielny pair, which brought a completely new feel to Arsenal’s defence, further exacerbated by the way the midfield pair ahead of them were set up (more on this later). 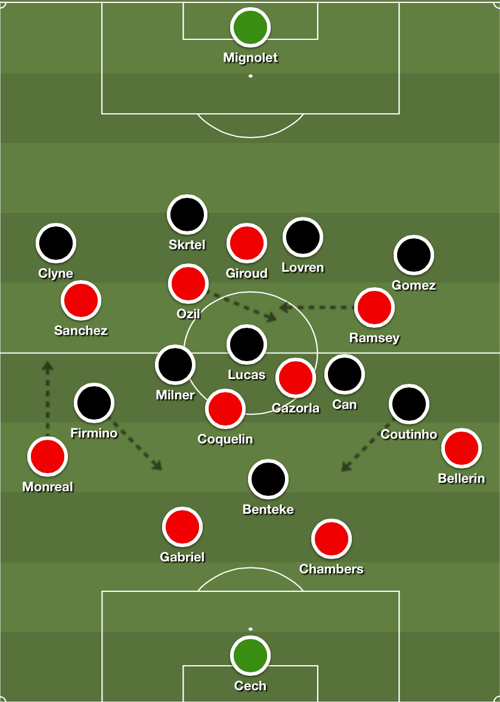 Liverpool start high up the pitch

The first tactical feature of interest was the way Liverpool lined up following kick-off. We could have expected the Reds adopt a deep and compact 4-1-4-1 (or even flat 4-5-1) shape and look to weather the initial pressure the Gunners almost always apply at the Emirates.

Instead, Rodgers had his whole side push in much more advanced positions. So instead of seeing the backline on the verge of the penalty area and the anchor man (Lucas) just ahead of them, the team was closer to the halfway line than their own box. As a result, Lucas was defending the area closer to the centre circle than the ‘D’, with Can and Milner joining the front three inside Arsenal’s half.

This analysis is for Subscribers only.