While Arsenal are seen as reasonable outsiders for the title, and Spurs usually manage to finish above Liverpool (in part down to the Reds’ own failings in three or four of the past six seasons), I still think the Reds and the Gunners are battling it out for 4th place. At no point in the last few years have I felt Arsenal were likely to win the title, and I still don’t think that’s the case; but in terms of squad building they’ve been getting a little closer.

Despite their dodgy start, I still expect to see Chelsea battling with Man City and Man United for the title, although City look by far the best team over the three games so far. Also, you sense that each of the Rich Three will look to add marquee signings in the coming week or so.

However, Liverpool have made a near-faultless start to the season, and right now, Arsenal look a bit ragged. I was wondering how the two clubs compare, in terms of squad-building, experience and potential.

To me, Liverpool appear to be where Arsenal were seven or eight years ago: overtaken by wealthier rivals, and looking to increase their income via increased stadium capacity. Except Liverpool are yet to actually increase that capacity (at least work is visibly underway and the wait won’t be long), and don’t have the Champions League to offer, nor the lure of London which seems to be increasingly important to the top-end players. After seeing stars being picked off by Chelsea and both Manchester clubs between 2006 and 2013, Arsenal now appear able to hold onto their best players, although the consensus seems to remain that Arsene Wenger doesn’t spend enough money – which of course depends on what funds he genuinely has available.

Liverpool still have a richer history than the Gunners, but most of that predates the Premier League era. Arsenal are now a bigger club, based on almost every measure: stadium size, average attendance, turnover, squad cost, wage bill and Champions League participation. The only thing that remains bigger at Anfield is the trophy cabinet, but after nine lean years it seems that Arsenal are at least adding domestic trophies to theirs; since the FA Cup of 2006, Liverpool have added just one, although since that season have actually finished 2nd in the league twice, something Arsenal haven’t achieved in a decade.

But some weird stuff has been going on at the Emirates in the past couple of years – at least by the standards of the previous five or six seasons. And despite not starting the season particularly well, Arsenal remain the most likely roadblock to Liverpool returning to the top four. 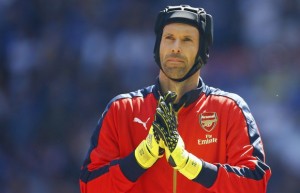