This is a greatly expanded version of a short article written for The Independent on Sunday.

I was in what was my usual seat in Anfield’s Lower Centenary stand 17 years ago when Steven Gerrard made his debut as a late substitute. I don’t recall thinking much about it at the time, and it wasn’t until a couple of weeks later that we got a glimpse of his full potential: a man-of-the-match display against Celta Vigo, in which he bossed the midfield at the age of 18.

Less than 18 months later I selected the then 20-year-old for my greatest-ever Liverpool XI, in a submission published in the match programme (my first time in print, I believe). Had his early injury problems proved more debilitating – as looked likely for a while about 13 or 14 years ago – my proclamation might have looked horribly naive, but he was by far and away the most complete young footballer I’d seen in a red shirt. 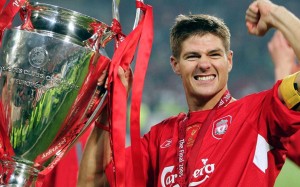 He fulfilled (indeed, exceeded) every ounce of potential, and yet somehow you still wanted more. The trouble with doing miraculous things on a football pitch is that people become accustomed to them. Fans begin to expect the unexpected, and expect it all the time. And yet imagine seeing Gerrard’s 17-year career highlights, and all his goals, back in 1999 or 2000 – someone coming back from the future to show you just how good he turned out to be. Would you believe what you were seeing?

This is for subscribers only.

Steven Gerrard - In Our Own Words