For Gerrard’s final game at Anfield, Rodgers opted to make a couple of changes. Moreno came in for Johnson and Ibe replaced Lambert. The latter move presumably was largely to allow the change in formation – the previous 4-1-2-3 was replaced by the 3-4-2-1.

On the other side, Pardew made more changes, effectively resting some important players. Palace started without their first-choice ‘keeper (Speroni), centre-back (Delaney) and goal-scorer (Murray) with their only natural holding midfielder – Jedinak – also kept on the bench. The in-form winger Zaha was also rested. Their places were given to players who made their first league start (the ‘keeper Hennessey and the winger Lee) with this being Kelly’s first start at centre-back. Chamakh also made a comeback to the starting XI following the injury that kept him out of the side for the last three months. 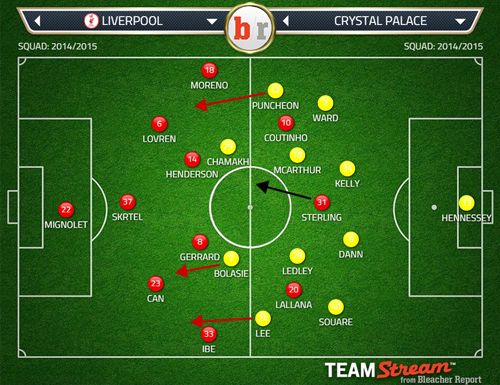 One of the main tactical talking points for this game was how both team’s set ups and starting XI (in terms of type of players, if not the names) were exactly the same as in the last game between these two teams – the FA Cup clash back on St. Valentine’s day. However, the fact the game produced a completely different outcome – on the back of how differently the teams performed – was mainly due to Liverpool, as Palace did pretty much the same things.

The Week That Was – Friday 15th May