Mourinho opted to rest a couple of his usual first-choice players, with Azpilicueta and Matic and replaced by Filipe Luis and the debutant Loftus-Cheek respectively. Arguably the absence of both Oscar and especially Ramires meant neither of the other important players – namely Fabregas and Hazard – could be given a rare rest too. Willian was once again preferred to Cuadrado.

For Liverpool, Rodgers kept the same side, players’ positioning and 4-1-2-3 formation that won narrowly against QPR the previous week. 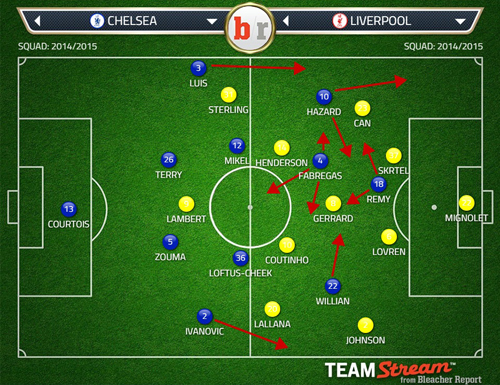 Perhaps the question that dominated the build-up to this game was whether or not Chelsea would take the game seriously, given they were freshly crowned champions and had been given almost the whole week off to rest and celebrate. The resting of two of his most dependable players, giving a youngster his league debut and freeing his team to play a more open and positive football than in some of the other – especially recent – games against big teams all hinted at Mourinho also riding on the wave of the positive mood and being willing to celebrate his success in a bit more style.

But the way his team started closing down aggressively and being quick to engage in – at times very strong – challenges suggested Chelsea weren’t there for the taking and wouldn’t let the game slip past them just like that.

All in all, Chelsea made a positive start, looking to quickly close down their opponents and trying to stamp their authority over the game right from the start. This led to a few crunching tackles and tough challenges but the desired effect was achieved – Liverpool were easily knocked down, which given their recent inability to start games well, resulted in the home side gaining early ascendancy.

In possession the Blues were as positive and open in how they spread their 4-2-3-1 shape in attack as in the early months of the league campaign. Both full-backs looked to quickly push on and often get ahead of the ball to provide wide outlets, allowing the attacking band of three to concentrate on roaming infield and looking for ways to overload the space between the lines, constantly trying to interplay with each other on and off the ball. Meanwhile the forward was also always on the move, either working the channels or dropping deep, looking to link up with the others and initiate dangerous passing combinations higher up the pitch.

The double pivot and the centre-backs were the only static (relatively-speaking) outfield players. The midfield pair split well to provide the required passing angles during the early build-up play but neither of them ventured too far forward or joined the attacking moves by bursting forward. These four players staying put meant Chelsea had the desired solid base to recycle possession and provide the platform for the other six to roam and interplay with full freedom in advanced positions.

Unsurprisingly, given the way both teams matched-up in terms of formations and individual clashes throughout the different zones and further exaggerated by Chelsea’s early dominance, the home side had two main areas of strengths. The first was the space between the lines, where typically for him or Oscar, Fabregas didn’t play right up in the Gerrard zone, looking to take him on or concentrating on bursting past him to get into the box. The Spaniard deliberately aimed to peel off that area and avoid positioning himself near Gerrard and instead looked to either drop deep and help build-up the play to ensure smooth possession play or drift wide to either create triangular overloads there or let the wide men drift infield in the vacated space. The situation in the 12th minute, when Fabregas dropped deep and joined the recycling process before sending a pass over the top for Remy to latch on to – only the Frenchman’s poor first touch allowed Mignolet to prevent what could have been a clear shot on goal – is a good example of the benefit of the former approach. Meanwhile, several other attacks saw Fabregas drift down either channel to initiate dangerous moves when combining neatly with Hazard and Willian, a few of which he himself tried to finish off. 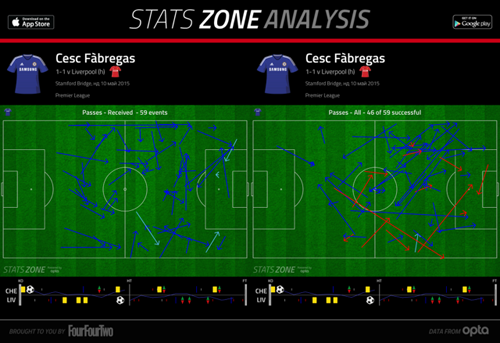 The second obvious area of Chelsea supremacy was down their left, Liverpool’s right. This was far from surprising given this is where the Reds have struggled defensively most of this season no matter the exact formation, as a result of having Can as either a right-sided centre-back or, as was the case here, as a right full-back but without being properly assisted or covered. Meanwhile, this is exactly the zone in which the Blues usually channel most of their attacks due to the presence of Hazard there and the fact Willian is often tucked in off the right flank. In addition, this is the zone where Chelsea had already done some damage to Liverpool, most recently in their semi-final clashes back in January.

Typically, the home side’s attacking method involved almost all of their attacking players congesting the left-hand side to overload the opposition and take it from there. As usual, Hazard was a constant menace whenever he stayed a bit wider or looked to quickly cut infield off the left. Expectedly, this resulted in Can struggling to cope as he was continually drawn out of position, leaving too much free space all over that zone which Skrtel was reluctant to get out and cover. Meanwhile, with Willian drifting infield from the right flank and Fabregas and Remy both also looking to get over there, Chelsea had the numerical advantage to completely overwhelm Liverpool. This was further magnified by Felipe Luis – the more attacking of the two full-backs – also playing in that zone and being quick to join forward, safe in the knowledge both midfielders were in position to cover the flanks and offer defensive support to Terry and Zouma.

The Trauma of Liverpool F.C.

Show Me the Money