In my youthful naïveté I used to imagine that everyone loved triple-European Cup winner Bob Paisley. I assumed treble-winner Joe Fagan was universally rated. And I guessed that three-time title-winning boss Kenny Dalglish had unflinching support from the fans.

Maybe they all did. Winning the biggest trophies does that. But in the modern era, when Liverpool lack the resources to be the powerhouse of old, it seems that everyone has a different idea on what’s required by a manager, and indeed, what constitutes success. What I will say is that after years of bickering it would be nice if most of our fans could agree on liking and supporting whoever is in charge, unless that person is hopeless (and possibly resembles an owl).

Not that we should settle for mediocre managers; but anyone who doesn’t win everything all the time will probably be described as not good enough. 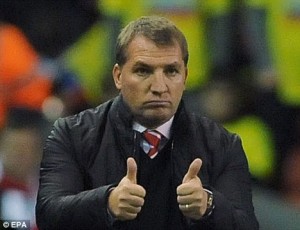 I fully understand the reservations that surrounded Rodgers in his first season at the club, and the uneasiness earlier in this campaign – when, by his own admissions, his team lacked identity. If you’d missed the past few months and landed during yesterday’s bore-draw you’d have probably thought that nothing had changed since the autumn.

Of course, there’s still time for the second half of this season to fall apart. But as things stand Rodgers’ is definitely in ‘credit’, if not yet delivering trophies. So why are some fans still so opposed to him?

TTT Pod #12: The Momentum of Sentimentality