It has long been established since the publication of Pay As You Play that there is a fairly strong correlation between league position and the value of squad (Sq£) and average cost of the starting eleven (£XI), after TPI inflation is applied. The corollary to this is to consider the effect of not being able to field your strongest team for whatever reason; injuries, suspensions and lack of form will all prevent a manager from selecting his most expensive and presumably strongest team, although home-grown players may account for a reduction in the £XI. For example, a club consisting of “a team of Carraghers” would be strong on the pitch (even if it did concede rather too many goals without a recognised keeper!) but would have an £XI of £0 under the Transfer Price Index, as he did not cost a transfer fee.

(The truth, of course, is that fewer and fewer teams are full of such home-grown talents.)

Manuel Pellegrini, for example, was able to call upon a squad with a current value (Current Transfer Purchase Price) of £449.8m during their title winning season, but of this, he managed to field a starting eleven with a CTPP value of £237.3m, to give him an average utilisation percentage of 52.8%. This isn’t particularly surprising, since you can only field a team of 11 players from a squad of (generally 25). If all players were equal in their cost, you would only expect a utilisation of 44.0%. Of course not all players are equal. Regular full-back Zabaleta cost only £7.8m in CTPP and so contributed far less to the cost of the £XI than did Aguero (£58m CTPP) even though he played 75% more games. 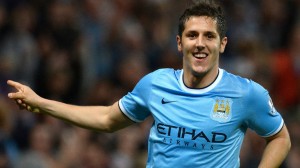 Jovetic: talented, but has rarely played (apart from vs LFC)

With this in mind, can we learn anything from the players not used? Are there any trends? And just how wasteful are Liverpool?