Crystal Palace await for the victors of the FA Cup fourth round replay between Liverpool and Bolton Wanderers on Wednesday evening; 7.45pm kick off UK time. This will be Liverpool’s first visit to the Macron Stadium since suffering a 3-1 defeat in the Premier League during the 2011/12 season. Bolton have won both of the previous replays between the two sides in this competition: 1929 at the same stage and 1993 at the 3rd round stage. 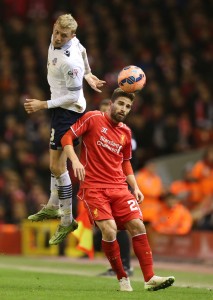 Since the sides last met, Liverpool were knocked out of the Capital One Cup semi-final, losing the 2nd leg to Chelsea 0-1 after extra time but recorded a 2-0 victory over West Ham United at Anfield on Saturday, making it five wins from our last six league games, with three consecutive clean sheets in the Premier League. The Wanderers in comparison suffered a 2-4 defeat away at Rotherham United following the draw with us at Anfield and drew 2-2 with Wolves at home on Saturday, to leave Neil Lennon’s side 13 points adrift of the play-off places in 14th place.