Although both teams had the bonus of one extra day since their last game (the other eight teams played on 26th and then on 28th) the managers made a few changes to their starting XIs. Interestingly Rodgers concentrated his effort refreshing his midfield unit, which eventually proved influential as to how exactly Liverpool dominated. Moreno and Manquilo came in at wing-back, Henderson replaced Gerrard as Lucas’ partner with the other change saw Can starting ahead of Toure on the right of the back three unit.

Monk meanwhile made three changes, but spread them across his team. Richards came for Rangel at right-back; Britton came back from injury to replace Ki in midfield while Routledge replaced the injured Montero down the left wing. 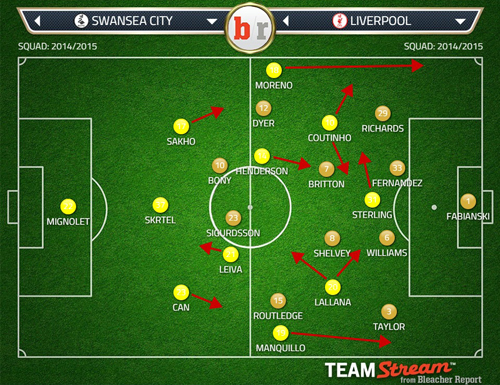 Given both teams’ emphasis and proficiency on the ball it was logical to expect spells of possession dominance for either side. As such the key aspect was going to be what each team will achieve when they are in their spell of dominance, in addition to how they defend and be efficient on the break during the time the opposition will inevitably settle into their period of possession advantage. Throughout the whole game Liverpool were clearly superior on these fronts. In addition, while, as in the Arsenal game, they clearly benefited from the opposition’s poor defensive organisation (mainly in the midfield zone), the home team played their part extremely well to make the most out of it.

Naturally – given their home advantage and the formational match-up – the game started with Liverpool being the team to dominate in terms of possession and territory. Similarly to Arsenal, Swansea approached the game with very reactive strategy – standing-off Liverpool, getting men behind the play and looking to cover the space in their half. The difference was that while Arsenal played in a 4-1-2-3 formation, Monk’s team looked to drop into two banks of four with Sigurdsson joining Bony ahead. Nevertheless, the crucial similarity was that tactically this played right into Liverpool’s hands.

Defensively, the two banks of four not only gave up the initiative to Liverpool too easily, but it didn’t really help in terms of positional solidity. The midfield two were left isolated and easily outnumbered 4-v-2, which put huge emphasis on them to perform their defensive roles in a faultless manner. The problem though was that with Britton just coming back from injury and Shelvey being far from the required positionally disciplined and defensively aware player, Swansea had a midfield pair that in any event (let alone when being so soundly outnumbered and put against such smart and technically capable players) would struggle to cope with their duties.

Using two banks of four meant down the flanks Routledge and Dyer were too deep to effectively be viable counter-attacking outlets, more so with Liverpool so easily dominating possession and as a result pinning Swansea back. However, their decreased offensive input did not come with the trade-off of more defensive help.

When a 4-4-2 team is facing a back three formation – especially the 3-4-2-1 – the big problem is how exactly to arrange the wide pairs to not only help centrally but also cover the wing-backs and effectively use their 2-v-1 wide advantage both defensively and offensively. Suffice to say this requires incredibly detailed overall organisation and understanding, something that for whatever reason Swansea didn’t really show. As such, it was clear that the visitors continually struggled to handle Moreno and Manquillo and in the meantime could not really get to grips with Coutinho and Lallana’s intelligent roaming between the lines.

The first issue was that the wing-backs naturally played in that space in between Swansea’s full-backs and wingers and as a result, giving huge positional troubles as it was not clear who is supposed to mark them. Then given Swansea’s deep and narrow banks of four it was a case of the full-backs expected to tuck inside. At times it looked like Taylor and Richards were assigned to stay closer to Coutinho and Lallana. But this meant it’s now up to the wingers to track Moreno and Manquillo, which is something they didn’t do well enough. With Liverpool dominating the ball and easily pinning Swansea back, their wing-backs were not only starting their runs from high up – in that in-between zone, as they were rarely called to drop deep and act as full-backs – but then pushing extremely deep in the opposition’s half. Both Dyer and Routledge, based on their already deep positioning, looked to initially keep an eye on the wing-backs, but whenever Manquilo and especially Moreno pushed on, they rarely tracked them back deep as to end up as the de-facto full-backs, which was the thing in theory required given Taylor and Richards were more like wide centre-backs.

All of this gave Liverpool additional carte blanche to use their shape and personnel to dominate from the start and never look back. Although Swansea’s poor defensive organisation benefited Liverpool, it was more a case of the Reds’ good play making the Swans’ poor play even worse rather than Swansea’s poor play making Liverpool look so good.