Given that the role of momentum in sport may be overplayed, it’s difficult to know whether cup runs are important. It’s always nice to win silverware, but if that silverware has no great meaning – if it has been devalued (or never was of value) – then it becomes a question of resource management. That is why so many clubs who don’t have big squads are choosing to play it safe.

Let’s be clear: Liverpool FC doesn’t exist to win trophies; it exists to win meaningful trophies. (There are plenty of lower league trophies if the club wants to drop down the divisions.) And it also exists to be part of the big occasions. Indeed, it exists to make people happy.

Last night Liverpool faced a tough test: going away to a highly-motivated full-strength Chelsea side in a semi-final. It ended in defeat, in extra-time, but to me it was further proof of a team that had been unravelling earlier in the season now finding its true identity.

Indeed, I believe that the Liverpool we’ve seen in recent weeks is actually in many ways better than last season. Last season Liverpool attacked supremely but could not defend. The team of the past couple of months has managed to both attack and defend very well indeed, but the crucial difference to last season is the lack of a natural goalscorer; currently there are none, whereas last season there were two. But as a team it somehow makes more sense right now.

If Rodgers can get Sturridge back into the side without losing the increasingly impressive influence of Coutinho then there’s cause for great optimism. Unlike Sterling, who can raid down the wings, Coutinho needs to be central, otherwise he grows peripheral. The two youngsters currently spearheading the Reds’ attack – aged 20 and 22 – will, I believe, become better finishers in time (stats I’ve shared before show how most goalscorers start out slowly), but right now they are erratic to say the least. Neither can generate much power, but they’ll hopefully become ‘cuter’ finishers with experience.

When Liverpool were losing games earlier in the season it all looked wrong. There was no style, no cohesion, no understanding. But Rodgers, who deserved some (if not all) of the criticism for the first half of the campaign, has reinvented the side in a new formation, and the balance looks beautiful. Suddenly Lucas is back to his old best (albeit tired in extra-time), Henderson is growing in stature, Can is playing like an old-head at the back (he can defend and attack), while Sakho, before injury struck, looked like a rock (but of course, he misplaced a pass so he must be rubbish, etc.)

Coutinho looks like the kind of player he has always promised to be, and Markovic has been a revelation as a wingback. Even Mignolet looks reborn as a more aggressive character, eager to solve the goalkeeping ‘crisis’ by addressing his weaknesses.

Liverpool come away from two games against Chelsea with ‘nothing’ – no trophy, not even a final – but they emerge with the look of a good side; one that created the better chances over the two legs and were denied by world-class keeping, and one that didn’t concede a shot on target in the first 135 minutes other than a penalty. Indeed, the Reds were able to go toe-to-toe with Mourinho’s Chelsea over two legs, in the way they used to under Rafa Benítez.

It’s hard to argue that big games against good opposition, from home and abroad, are bad for any player’s development. Clearly it’s a good thing in isolation, to be tested in such arenas; just as it is to play in cup finals (even League Cup Finals). The more you do something that initially makes you nervous the more accustomed to it you should become. It doesn’t mean that it eradicates all chance of freezing on the big occasion, but the first time you do something you can feel overwhelmed. In terms of player development, the good news is that further cup games await. But cup games can mean bad news, too. 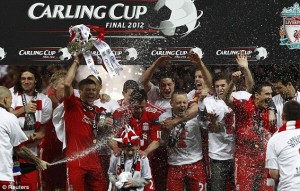