Unsurprisingly both managers opted for their best XIs, without making any massively surprising calls. Rodgers went with exactly the same line-up as in the first leg, while Mourinho started with his usual triumvirate.

The only real surprising move was the latter’s decision to play Zouma instead of Cahill. However, even this move wasn’t entirely left-field given Cahill’s poor recent form and mounting individual errors (namely in the Bradford game). The young Frenchman’s pace though eventually paid huge dividends, and was one of the main reasons why the Blues handled Sterling much better here compared to in the first leg. 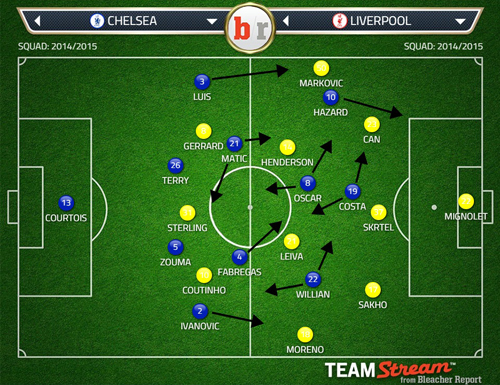 The opening ten minutes or so of the game were quite a frantic period with both teams obviously feeling and running on high adrenaline. They pressed each other fiercely then quickly hit the ball forward aiming to initiate fast attacks whenever the ball was regained.

The only contrast was that Chelsea and Liverpool channelled their attacking moves differently. The home side was quick to hit the ball down the sides, looking to quickly overload the channels and work the ball inside the final third from there. A few dangerous moves were created, one of which resulted in Chelsea’s first penalty appeal following Willian’s shot being blocked by Lucas’ hand.

Meanwhile the visitors put emphasis on quickly feeding Sterling in behind down the inside left channel. Although there was plenty of space available for the forward to quickly exploit, it was Zouma’s pace and assertive ball-winning abilities that largely minimised that threat. The fact Zouma played as the right-sided centre-back not only helped keep Sterling in check (who naturally initially drifts to the left before cut infield on his right), but was one of the main reasons as to why the space in behind Fabregas was much better plugged than whenever Cahill is playing.

Early on there was a couple of fine interventions from the French defender in that area but the best example of how he handled the Sterling threat came in the 17th minute. Initially Zouma misjudged the flight of the ball, missed it and allowed Sterling to run in behind. It looked like the forward would go in 1-v-1 with the ‘keeper, but Zouma showed tremendous recovery pace to catch Sterling (not an easy feat!) and block tackle him to clear the danger.

By the 15th minute, the game naturally calmed down after the frenetic start and Chelsea gradually settled in a territory advantage. Their overall dominance was not a product of them suddenly starting to boss possession per se, nor was it solely ensured through pinning Liverpool back by pressing them hard. The visitors struggled to either play out from the back successfully or retain the ball for long enough in midfield, which clearly contributed to Chelsea’s overall dominance. Nevertheless, the prime reason as to why the home team managed to largely stifle Liverpool’s attacking threat, quickly regain the ball, and then get forward again was their intelligent and disciplined positional play.