Liverpool will be hoping to make it three Premier League wins in a row when we host Hull City on Saturday afternoon; 3pm kick off UK time. With 4th placed West Ham playing at home to Manchester City on Saturday lunchtime, victory for the Reds will move us up one place up to 4th so long as the Hammers drop points against City.

Steve Bruce’s Hull currently sit in 11th place having won twice – Q.P.R. away 1-0 and Crystal Palace at home 2-0 – drawn four (Stoke (h) 1-1, West Ham (h) 2-2, Newcastle (a) 2-2 and Arsenal (a) 2-2) and lost twice (1-2 at away to Aston Villa and 4-2 at home to Manchester City. With 13 goals conceded – one more than Liverpool & the sixth highest conceded in the league – and with injuries to two of their first choice ‘keepers and central defender Michael Dawson, this should be a game where goals are not hard to come by. 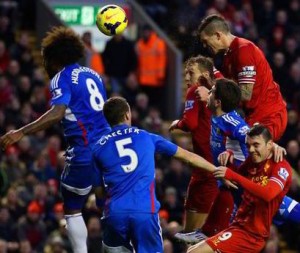 Liverpool won the corresponding fixture last season 2-0 with goals from Agger and Suarez and with five games in the space of two weeks across three different competitions (Hull, Newcastle (a) and Chelsea (h) in the league, Swansea at home in the League Cup and a trip to Spain to face Real Madrid in the Champions League), victory over the Tigers would be a huge boost to our confidence. That victory over Hull last season kick started our remarkable form over the second half of last season as we won 15 of the final 19 league games. A similar victory and similar sequence of form would be very welcome right now.

Liverpool have yet to lose at home to Hull in the league and Steve Bruce has only managed one win at Anfield as a visiting manager. That win came during the 2004/05 campaign when his Birmingham side left L4 with a 1-0 victory courtesy of a Darren Anderton strike. Steven Gerrard with four goals in five games is our top scorer against the Tigers.