– Rodgers switched to the diamond formation with Coutinho at the tip and Sterling up front with Balotelli.

– Liverpool started brightly with Sterling looking to get in behind, and Balotelli dragging Varane from his comfort zone.

– Despite one or two promising attacks, the home side rarely threatened Casillas because although we had plenty of players in forward positions, the patterns were more chaotic than effective.

– Real focused their attacks down Liverpool’s right side, with the overlapping full-back, Isco coming inside and Ronaldo further forward.

– The Reds’ inability to press from the front, or defend the wave of attacks by the away side.

– Rodgers did not really respond after Real took control

– In the second half, Liverpool improve as Real sit deeper and the Lallana-Balotelli switch helps

– Liverpool give up, Real comfortably see out the game

In terms of selection, neither manager sprung any major surprises. With Rodgers switching to a 4-diamond-2 formation, Allen came in to bolster the midfield zone, with Coutinho chosen over Lallana to play behind the front pair of Balotelli and Sterling.

For Real Madrid, the only thing close to a surprise was seeing Carvajal benched and Arbeloa playing instead of him at full-back. The rest of the Spaniards’ star players were all on the pitch, with Ancelotti starting with a formation that looked like a hybrid between the 4-2-2-2 and 4-1-2-3 Real are using this season. 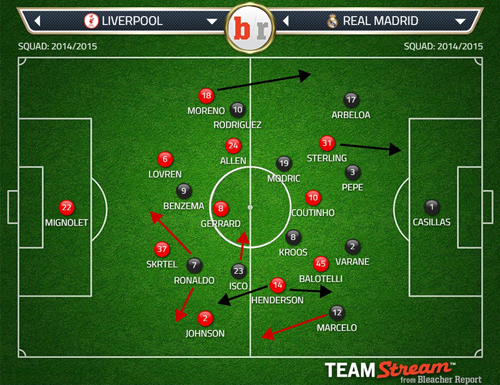 The start of the game offered enough promise that it might turn out as one of the proper Champions League Anfield nights. However, once Real Madrid’s possession play took control over the game, there wasn’t really a clash or any kind of tactical combat per se. Liverpool quickly and disappointingly readily succumbed under the pressure and quite easily gave up a three goal lead to their opponents. By half-time the game was truly over.

The Reds started the game very well, pressing aggressively and engaging their oppositions in fierce tackles all over the pitch. This fired up the crowd and helped keep the intensity and the playing tempo very high. As a result, Liverpool were on top of Real Madrid at the start.

Tactically, the most interesting aspect was that Rodgers opted for the diamond formation with Sterling pushed as the most advanced forward down the left hand side, while Balotelli – as per usual – roamed deeper and wider on the opposite side. The way the game started and due to the fact Pepe and Arbeloa made up the right-sided part of Real’s back four, this approach by Rodgers actually looked a very suitable thing to do. By having Sterling staying higher up down that inside left channel meant he was directly up against Pepe and Arbeloa, so he could pick up the ball and run at them. But with the former’s propensity to step out from the backline and rush into challenges, there could have been space for Liverpool’s player to also latch onto through balls in the space left in behind.