Liverpool return to league action with the meaty prospect of the 189th Merseyside derby at Goodison Park on Saturday lunch time – 12.45pm kick off . With the match being Roberto Martinez’s first Merseyside derby as Everton manager, and just three points separating Everton in 6th and the Reds in 2nd, it should be a typically feisty affair. 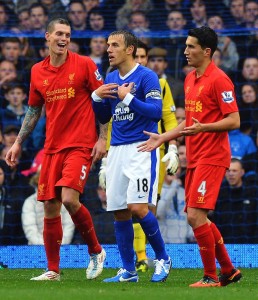 The Toffees began the campaign with three consecutive draws but have since won five, drawn two and lost one of their last eight Premier League encounters, their only defeat being the 1-3 reverse they suffered at Manchester City. Everton were the draw specialists last season, ending the campaign with 15 stalemates, and their tally of five in 11 games so far this season is the joint highest in the league alongside West Bromwich Albion.

Speaking of draws, the corresponding fixture last season ended 2-2, with Luis Suarez controversially denied a stoppage time winner. A Leighton Baines own goal and a Suarez header put the Reds 2-0 after 20 minutes before goals from Leon Osman and Steven Naismith levelled matters before half-time. That 2-2 draw is only the fifth time in 21 matches that the two sides have shared the spoils at Goodison.

Only Arsenal – with eight victories – have won more Premier League games than our total of seven prior to this match, while only Manchester City (28) and Arsenal (22) have scored more goals than our tally of 21 to date. 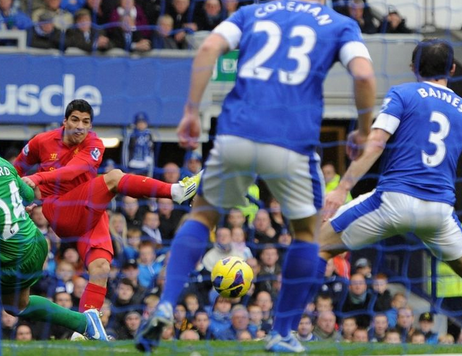 Our biggest victory at Goodison is 5-0 which came just over 21 years ago this month, when Ian Rush smashed four with a Mark Lawrenson strike sandwiched in-between Rush’s 2nd and 3rd strikes. Our heaviest defeat came during the 1908/09 season when Everton recorded a 0-5 victory.

Liverpool’s record against teams managed by Roberto Martinez (all competitions):

We received an email from Paul Holliday in Perth, where all thoughts of The Ashes will be put aside on Saturday when the derby day charity game for the HFSG kicks off.

Two previous derby day events raised approx £2000, however this derby day seems to be a lot bigger. With the Help of Margaret Aspinall and Everton FC, who have provided us with a fully signed Everton home shirt and a signed Liverpool team track suit top worn by one of the starting 11 against Sunderland away last year with ’96’ on the back.This time a trophy has been purchased to be awarded to the winning supporters’ club. Everton won the first game and Liverpool the second game, so Liverpool are the current holders! The match has the backing of both Liverpool and Everton Supporters Clubs in Western Australia.It’s $5 for supporters to watch the game and $20 per player. They’ve also got hold of a replica European Cup which anyone can get a photo with for a gold coin donation. A couple of local businesses have donated the food and drink to be sold on the day.The venue is Mater dei College,107 Treetop Avenue, Edgewater, Perth, Saturday 23rd Nov, KO is at 12 noon local time. Any help promoting the event will be much appreciated,a nd if we have any TTTers in WA at a loose end this Saturday, you know what to do!For more details:

The rest of this preview is for Subscribers only