Both teams had to make one or two changes to their usual starting eleven. For Everton, the only change was Barkley replacing Osman as the attacking midfielder behind Lukaku. Everyone else remained in their usual positions within Martinez’s usual lopsided 4-2-3-1 formation.

The Reds had to make two rather enforced changes. With Enrique missing the next couple of months and Cissokho  failing to impress recently, Rodgers opted to use Flanagan as the left-back. It seemed to me that using Johnson there (to deal with the speedy and tricky Mirallas) with Toure on the right (to track Pienaar’s roaming runs) had the better tactical suitability. But as Rodgers hinted in the days before the game (and further verified after it), Flanagan was mainly selected for his ‘mentality’ and ‘understanding’ of what the derby is all about, rather than some specific tactical reason.

Then with Sturridge lacking the fitness to last the whole game, he started on the bench with Allen coming in. Therefore Liverpool went for a 4-1-2-3 formation, with Allen joining Gerrard ahead of Lucas. 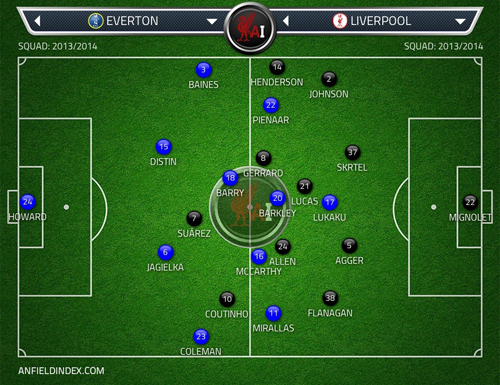 As a whole this game had everything: excitement, drama, controversy, plenty of goals and further missed goal-scoring chances. Strangely all the goals came directly from set-plays or situations following set-pieces. But the game’s best chances all came from open play, with some unbelievable misses. In addition, with both teams going through phases of tactical struggle and stability in different ways and during different periods of the game, the clash offered a quality tactical battle too.

The way the game started, it became clear both teams had different approaches to the game. Right from the start, Everton looked to set up camp in Liverpool’s half, trying to impose their proactive possession-based style and put the opposition under sustained pressure. The players built well from the back then were spreading nicely in attack, with the expected movement patters and diversity down the flanks and through the middle easily visible and recognisable. Meanwhile, Liverpool unsurprisingly tried generally to keep it tight and solid in midfield and at the back. With Everton having the upper hand with the ball, Liverpool had to mainly defend. But once in possession, the Reds looked cautious, recycling in deeper areas and waiting for the chance to break forward dangerously. 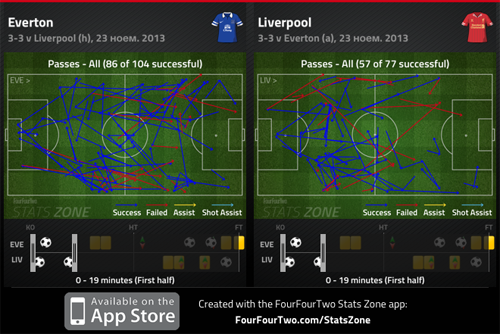 Generally, neither team looked particularly keen to press from higher up the pitch, due to the associated risk of leaving gaps for the opposition to break forward. The situation in the third minute illustrated that. With Allen surging forward to close down Jagielka, Everton quickly passed the ball around him, with McCarthy having acres of space to carry the ball forward and reach Liverpool’s penalty area before being engaged. Both teams looked more focused on keeping a solid shape, using the forwards to drop off towards the midfielders in order to prevent the opposition having the space to pass through the middle.

Once Everton looked like they’d started to settle in terms of passing flow and succeeded in pinning Liverpool back in their half, the visitors scored following a corner in the fifth minute. But then the home team had the chance to pounce back and equalise only three minutes later following another set-piece situation – this time an indirect free-kick.

Logically, given their positive start and quick equaliser, Everton felt the sudden rush of adrenaline, and helped by the jubilant crowd, dominated the next few minutes. However, except for a few rather chaotic attacking moves, the home team failed to really impose themselves and capitalise on their attacking momentum. Their best chance came following an error from the opposition. In the 12th minute, Gerrard was caught in possession and quickly closed down by Piennar. After regaining the ball, the Everton player send a great through ball for Lukaku, to send him one on one with Mignolet only for the keeper to react brilliantly and block his way.

Then again when it looked like Everton had calmed down and started to re-establish their positional and possession dominance, Liverpool struck again with another set-piece goal: Suarez’s brilliantly executed direct free-kick in the 19th minute.