Both teams started with the same XI – and formations – as they did mid-week for their COC games. This meant the game was anticipated to be a fairly basic tactical battle with clear areas of tactical supremacy based on the selected formations. The first half, especially, backed-up these initial expectations with Sunderland’s 4-1-2-3 generally dominating over Liverpool’s 3-4-1-2. Still, as it was also fairly easy to predict, Liverpool’s better quality proved to be the deciding factor. 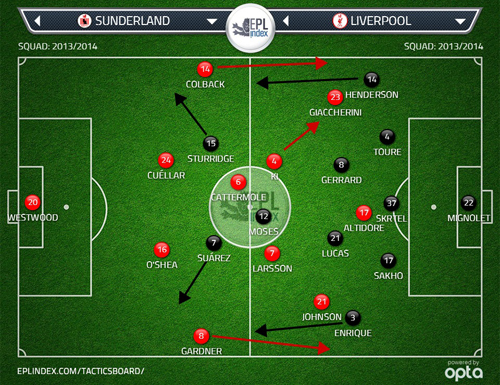 Sunderland showing enthusiasm, and nothing else

As expected, the managerial change and the appointment – even on a temporary basis – of a popular figure, resulted in the morale and motivation being lifted. With the players starting the game with obvious fighting spirit and desire, the home crowd followed suit and were quick to get behind their players, supporting and urging them to attack again and again. Logically, Sunderland quickly became the dominant team, putting Liverpool under constant attacking waves of pressure.

Anyway, on top of Liverpool’s better players, what swayed the balance towards the visitors was Sunderland’s staggering inability to turn their tactical supremacy into anything meaningful.