Arnar: Michael welcome to The Tomkins Times. It’s been quite a journey for you to date. From England to New York, Brazil and the Netherlands to name a few destinations and now you are coaching at Crewe Alexandra. I would like start things off by giving you the opportunity  to introduce yourself to the site.

Michael Jolley: “Hi Arnar – thank you for the opportunity to speak to you. As you say I am now coaching at Crewe Alexandra Academy under Dario Gradi, which is a great privilege for me. I am learning a huge amount from him and all the other staff at Crewe. I have been coaching for eight years and Crewe is my 5th professional club – I have been lucky to have coached in many different contexts and levels from the youngest academy players up to first team. My background is probably a little bit unusual for a football coach because my degree is in Economics and I worked outside football at the start of my career. For example I was working as a trader in New York at the time of the 9/11 attacks.

My experience outside football has helped me to appreciate how fortunate I am now to have a full-time position coaching at such a great club. I think it has also helped me to appreciate what players can do rather than focusing too much on what they can’t. In the summer of 2013 I was one of 16 coaches to graduate from the first FA Elite Coaches Award, which challenged my thinking on a number of issues and forced me to re-examine my coaching and playing philosophy. I would definitely encourage other coaches to try and do the same – the game is evolving quickly and the best coaches will be those who can think ahead of the game – and the other coaches.”

Arnar:  Yes I can imagine that background would give you a very different perspective then you would have had otherwise.  The FA Elite Coaches Award is something I find fascinating after I heard a bit about it. And I think it’s something that should get more publicity. Can you share your experience of it and what it consisted of? 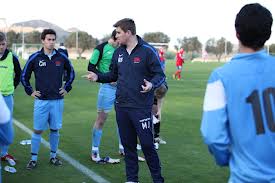 Michael Jolley: “The course was devised by Dick Bate at the FA who is a world class coach educator. Previously, the only option for A-Licence coaches to further develop was the UEFA Pro Licence, which is an excellent course but is mainly geared towards preparing people to be Managers or Head Coaches. The Pro Licence covers areas such as dealing with the media, managing upwards, and financial management, all of which are critical for managers but that leaves less time for focusing on the intricate detail of coaching at the very highest level. Dick’s concept was to create a Pro Licence equivalent for coaches – ideally younger coaches – which would be all about the game, and coaching the game at an elite level.

The FA selected 16 coaches to undertake the pilot course, which we did over 18 months, graduating in July 2013. The course was very intense and required us to complete tasks in our own time or in small groups, and then report back to the whole group at the regular get togethers. One example of the type of project we had to deliver – a group of four of us were the coaches of Manchester United, preparing to play Barcelona in the Champions League Final. We had to prepare every aspect of the game including a detailed tactical analysis, logistical preparations, physical loading and various scenario analyses. We presented our work to the group and then were fortunate that Rene Meulensteen shared with us how the real United staff had gone about the same task, sharing his work in preparing for the 2009 Champions League Final.

The strength of the course came from two main factors: the quality of the delivery from Dick Bate and Alistair Smith was excellent. Second – the openness of the other 15 candidates was fantastic, meaning that we shared some very frank and honest discussions.  We all supported one another through the learning process and it was certainly a special group of people.”

Arnar: This seems to me to be groundbreaking. I was blown away by a video of a lecture that Smith held for example. I can’t even a imagine how much a person can learn over a 18 month period in a course designed by Dick Bate and Alistair Smith, that has so much interaction with the people you are working with as well. Is there anything in the world at this stage that you think would compare to it?

Michael Jolley: I’m not aware of anything that is similar at the moment. I know that the FA have been pleased and impressed with the success of the pilot course and are planning to roll out the course as a permanent offering. They’re also trying to get the course recognised by UEFA as a Level 5 equivalent to the Pro Licence, so I guess if that happens it will be picked up by other countries and delivered there too. I feel really lucky to have been one of the first coaches to go through the experience.