First, a polite, gentle and belated ripple of applause please for my century … 121 players now linked to so far since the tracker began. Removes helmet, wipes sweat off brow, raises bat to TTT balcony …

After last week’s rather torpid gossiping, we start this week in a very different major key:

Liverpool are ready to approach Bayern Munich to discuss a deal for 21-year-old winger Xherdan Shaqiri. And after insisting that he remains active in the transfer market for new players, Rodgers is hopeful he will be able to land Shaqiri for a bargain price. The Switzerland international moved to Bayern from FC Basel last summer, but has failed to establish himself as a regular, and faces an uncertain future under new manager Pep Guardiola. Shaqiri is expected to meet with Guardiola next week to discuss his future, but it is expected that he will ask for a move away. Liverpool believe they are in pole position to do business, and would be able to offer the player regular match time in Rodgers’ exciting new-look side. Bayern are unlikely to part with Shaqiri without a fight, despite splashing out £30million on Mario Gotze this summer, but would be interested in loaning him out. However, Liverpool are only keen on a cash deal, and will now approach Bayern to talk terms. Shaqiri, a fast, versatile and skilful left-footed winger, can also play behind a striker or at left-back, and would represent a key coup for Liverpool. It’s thought that Rodgers would be willing to pay up to £20million to get his man. Metro July 15

Two days later though and the Daily Express amongst others were damping down the flames:

BAYERN MUNICH’s chief executive Karl-Heinz Rummenigge says the club have not received an offer for Xherdan Shaqiri despite reported interest from Liverpool. The youngster only joined Bayern last summer from FC Basel but failed to make much of an impact in the face of fierce competition for places. And the situation does not look like improving next season after Bayern added Mario Gotze and Thiago Alcantara to their squad. Nevertheless, the Champions League winners seem reluctant to lose Shaqiri, who at 21 still has plenty of time to realise his sizeable potential. Rummenigge said: “Nobody has called about Shaqiri. Right now there are no plans (to sell).” And in a blow to Liverpool’s hopes Rummenigge also hinted that Bayern may have already closed for business ahead of the new season. He said: “I think we will go into the season with the current squad.” Whilst a loan move for the Swiss international still seems like a possibility, Liverpool have reportedly ruled out making such a move, preferring to sign the winger on a permanent deal. 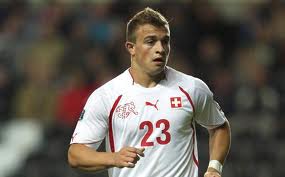 Next, the interminable saga of the Ajax pair:

Liverpool want to clinch a £22million double deal for Ajax stars Christian Eriksen and Toby Alderweireld while Chelsea’s Ryan Bertrand is also on their radar (good to know our transfer committee has a radar). Daily Mirror July 15

Attacking midfielder Eriksen, 21 and Belgium international defender Alderweireld, 24, both only have one year remaining on their Ajax contracts and are expected to leave the Dutch club. Dortmund had also been chasing Eriksen, but Liverpool now only expect to face competition from Roma. The Denmark international has been one of Europe’s outstanding young talents in recent seasons. Ajax coach Frank de Boer said: “I would want nothing more than having Christian with us for a few more years. But we realise that the interest in this kind of player is huge. And I can also understand that he wants to make another step in his career. I can’t stop him.”

Despite the fact Liverpool cannot offer Eriksen Champions League ­football, it is understood he is interested in moving to Anfield. De Boer added: “If ­Liverpool go back to really good possession play, it can be a success for Christian. But it does mean that their entire way of playing has to change. It is up to Christian what he wants. If he feels good going to ­Liverpool anyway, then it is up to him.”

But our ‘race’ to sign Eriksen may be run, according to InsideFutbol on July 18:

The race to sign Ajax star Christian Eriksen has taken an unexpected turn, with the news that the 21-year-old has reached an agreement with AC Milan on a four-year contract. He has been strongly linked with Liverpool, although when questioned recently about interest from the Reds said he had nothing concrete to report. Now it appears his future could lie with the Rossoneri. According to Danish daily Ekstra Bladet, Eriksen has agreed terms on a contract which would run for four years with the Italian giants. However, Milan have not yet thrashed out a fee with Ajax. And that may not be entirely straightforward. Ajax are thought to want around the £16m mark for Eriksen, who has removed the threat of leaving on a free transfer by saying he will sign a new contract with the club if he is still at the Amsterdam ArenA after the transfer window closes. bMilan now need to raise the funds for an approach, with offloading Kevin Prince-Boateng a real possibility.

Sure enough, by July 18 Inside Futbol said “AC Milan could be ready to cash in on Kevin-Prince Boateng this summer, with the midfielder having a number of suitors. Believed to be looking at Boateng are Liverpool and West Brom, Turkish champions Galatasaray and wealthy Ligue 1 outfit Monaco.”

Meanwhile, “Alderweireld has turned down the chance to discuss personal terms with Norwich after the Dutch giants agreed a £7m deal for the centre-back with the Carrow Road club.”

He explained why he would not be rushed into a move to Norwich – leaving the door open for Liverpool. “I am keeping all my ­options open,” said ­Alderweireld. “I am not rushing out the door. The whole picture of my next club has to be perfect. With every offer I am ­receiving this summer, I look at the pros and cons. The total package of my next club has to be right for me.”

Liverpool have also made an enquiry about left-back Bertrand as Rodgers attempts to build a squad capable of challenging for the top four. Rodgers knows Bertrand well, ­having worked with him during his time at Chelsea and taken him on loan as his first signing at Reading.