English football has always been a big part of my life. Liverpool – the team I’ve supported since I can remember – is probably the main reason. I also admit that I have thoroughly enjoyed watching other English teams as well, and perhaps surprisingly, the English national team always has a place in my heart. For some time now it has been disappointing to watch the English national team and the results they have managed to achieve.

But those results are not at the core of my frustration and sadness. Football is based so much on technique and the ability to outsmart your opponent, so it baffles when you recognise how England has approached the game in terms of coaching (and playing) for decades. Trying to outmuscle and outrun the opponent most of the time is quite simply not the way to achieve great success; and it has been that way for a long time.

The technical ability and tactical understanding of English players is nowhere near good enough. You only have to look at the activity in the transfer market of teams in the Premier League as an indication. Teams usually look overseas for the best talent. The players who supply the entertainment to the league are not usually from England.

This is not because players from England do not put in as much work in training either, far from it. It is the result of the restrictive and regressive way of coaching players that goes on in England, from a very young age. You don’t put kids out on the pitch and make them play like fully grown men/women. You cannot expect a child to have the physical and mental development to perform in a forum which is meant for adults. The size of the pitch; the goals;  the rules, which are not yet within their grasp. And to add to the damage, the expectation for the child to put in a performance and get results like a professional, by putting in a Herculean effort, is the main priority. This puts extreme physical and emotional pressure on a child. Coaches and parents need to be extremely aware of how harmful this can be.

Football is a sport that is very different from, say, long distance running or rugby. So why then train children and teenagers like they were preparing for a marathon or an athlete that has to have great strength to withstand or make tackles that involve great force?

The movements of a football player are completely different from that of a long distance runner who has to have great stamina to run – more often than not – in a straight line. A footballer has to move in all directions with or without the ball at his feet. In fact, a footballer uses a variety of movements with great finesse and timing to get past his opponent, and has to have a wide variety of technical skills to dribble past players; to make a pass to a teammate whether it’s in a small space or a large one; to strike the ball so it has a greater chance of hitting the back of the net or to receive the ball with variable amounts of speed, and then have the strength to move seamlessly into the next phase of play.

I’m not saying stamina or strength don’t help a footballer, but surely the focus of any coaching should be to improve his skills as a footballer?

People like Laureano Ruiz and Johann Cruyff have known this for decades. Their methods, and those of other like-minded coaches, have proven to be very successful for a long time. The results in youth development have been excellent. This game is mostly about entertainment and if a child doesn’t get the chance to learn about football in the way that they see their idols playing, then what happens to that child’s enthusiasm and joy? It might not completely go away but it is bound to diminish. And what purpose does it serve to have a child spending most of their time running around waiting for the few chances to get a touch of the ball? Or spending the majority of training waiting in line? Football is a game and its purpose is for children to enjoy playing it and have the opportunity to entertain and express themselves in a creative way.

Let the people come to the stadium and enjoy themselves. As long as you look to a certain way of playing, everybody can play. Getting the ball, treat the ball well, let it be your friend. When they saw us play everybody was happy. They just went home laughing. If you can laugh and enjoy yourself. It’s one of the most important things there is… 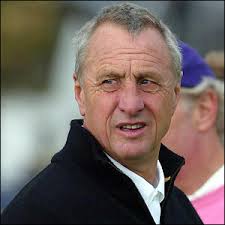 Johann Cruyff – player, manager, coach and architect of a style

These words carry a lot of meaning to me. I even look at it as a way to practise football.  Starting with this:

As long as you look to a certain way of playing, everybody can play.

With small sided games everybody can, and will, play more football. Nobody is excluded.

Getting the ball, treat the ball well, let it be your friend.

In small sided games children get to have the ball so much more. They learn how to treat the ball well, they get adjusted to the touch of the ball faster as well as dribbling and passing. Even juggling it. The ball becomes their friend, not just an object they wait to receive from time to time or hoof up the pitch as soon as they get it. Or just running around, which can be fun, but there are plenty of other sports that have that as their main focus.

When they saw us play everybody was happy.

These words are one of the most important things a coach and a parent should remember. At youth level, it‘s the team’s performance that matters the most. That they improve their skills, their technical abilities. The final result is secondary. Too often coaches and parents become fixated on winning at all costs. Putting a child under pressure to win all the time can have a very damaging effect on the child’s emotional and even physical well being as well as their footballing abilities. These children are there to learn how to play and enjoy that process.

In the long run, if you teach them how to play in all aspects of the game they don’t miss out on necessary lessons they need for the the future. It takes time. Taking shortcuts by using tactics that will win the majority of games but not teach the children the lessons they will need only makes a footballer who lacks the necessary skills that they should have learnt at a young age. Many skills can be hard to master if not learnt at a young age. And of course the benefits of a happy learning environment are huge.

And then of course the end of that sentence:

If you can laugh and enjoy yourself. It’s one of the most important things there is.

No need to really explain that. It’s what we all like to do most of the time but this is one of the most important things about football. What Cruyff is saying here is not that different from what Bill Shankly said when he was asked how he would like to be remembered. And, what was taken from that and agreed on, was that he made the people happy.

Small sided games should be every child’s introduction to football in my opinion. Horst Wein, for example, whose book Developing Youth Footballers is the official textbook of the Spanish football federation and is praised all over the world, has had great success in implementing small sided games to develop youth footballers. Instead of playing on a full sized pitch with 11 v 11 with the same rules as adults which is something they are not mature enough to do, the pitch is split up into smaller sections where they play 2 v 2 or 3 v 3 to start off with. They use a football and goals that suit their size. Everyone is always involved with play and takes an active part in all games. They don’t do drills which have not been suited to their needs. They play games that have been suited to their level of maturity. First and foremost, in the beginning they get familiar with the ball and how to control it. This is so important for the future of a young footballer.

As they get older the number of players increases up to 7 v 7, 8 v 8 and finally, when they are mature enough, 11 v 11. And as the pitch they play on gets bigger, so does the ball and the goal. All in connection to their age, size and maturity.

The games are designed to give them the technical and tactical knowledge which they are ready to learn at each stage of development. The games can easily be made by the coaches by combining their imagination with their knowledge of football and applied to learn a vast array of specific skills. They can also be designed so they don’t become too repetitive, which would quite simply bore a child – the peak level of attention when children learn the most can get lost if the games become too mundane.