In the beginning, there was Moneyball.

Well, not really.  What kicked off sport’s interest in statistics was an underground movement in baseball headed by Bill James and which eventually made its way into the mainstream in the form of statisticians being employed by clubs. It was James who coined the term ‘sabermetrics’ (the search for objective knowledge about baseball) and who started publishing his theories in the highly influential Baseball Abstract books.

Yet it was Michael Lewis’ book ‘Moneyball’ about the Oakland ‘A’s’ use of statistics to make up for their financial disadvantage that brought it all to the public consciousness. Since then anyone wanting to try and use statistics in any sport has had to live with claims of taking a ‘Moneyball approach’.

And no sport has had to hear such accusations of late as much as football. All of which makes it all the more surprising that there is still a huge misconception as to what ‘Moneyball’ actually is. Indeed, many still harbour the belief that it is all about using statistics to determine which player should be signed and which shouldn’t. Or to use numbers to determine which players to use or which tactics to adopt.

But it isn’t about that. Or, at least, not only about that. It all centres around the idea of using statistics to gain an edge or to confirm whether the cold facts that are held in the numbers can support widely held perceptions.

Take corners. There is an inevitable rise in anticipation every time a team wins a corner, which is understandable given that this leads to a greater chance of scoring. Except it doesn’t.

That is what Chris Anderson and David Sally argue in their book ‘The Numbers Game – Why Everything You Know
About Football Is Wrong’. Again, this being a book about sports and which uses numbers, it is somewhat inevitable that ‘Moneyball’ gets a mention, but this is much more than that: whilst Moneyball was trying to explain a movement, The Number’s Game simply want to help you understand football better. Chris Anderson kindly agreed to this interview: 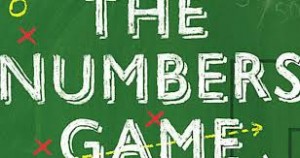 The rest of this interview is for Subscribers only.