This is the first of four short pieces aimed at identifying players to fill four playing roles (identified following a quick survey I did on Twitter):

The approach and techniques used are the same as those described in a TTT piece I wrote in March called ‘A Model to Identify Players’. If you haven’t read this piece, you’ll probably need to – just so that you understand the method, its weaknesses and the underlying assumptions. The model used for this piece has been modified slightly and uses newer data – but the basic ‘core’ remains unchanged.

I’ve been trying to think of a better way to describe this work and how best to use it. After some digging, I came across a detailed account of the story of radar technology in Britain during the Second World War… 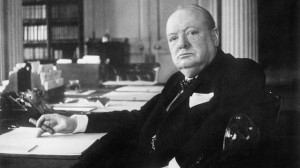 “This was a secret war, whose battles were lost or won unknown to the public; and only with difficulty is it comprehended, even now, by those outside the small high scientific circles concerned. No such warfare had ever been waged by mortal men.” – Winston Churchill

The popular view is that Britain invented radar and possessed a superior radar technology to the Germans throughout the war. This is actually not the case. The British actually deployed a much more primitive radar design than the Germans. However, what they did have was a much stronger appreciation of the ‘strategy’ and ‘tactics’ that would maximise the benefits of the technology.

Whilst the Germans could create superior radar data, the British were the masters of the ‘filter room’ – the place where their inferior data could be turned into superior information or ‘actionable intelligence’. For the British, radar was just a component of the overall ‘air defence’ picture. A picture that was only complete when spotting reports and signals intelligence were synthesised into it.

My work to-date is really a primitive form of ‘talent radar’. Where some approaches prioritise ‘clarity of signal’, I’ve opted to sacrifice this in exchange for greater ‘coverage’. This increases the potential of the capability, to see talent that others might not, but it comes with a cost – there is a need to filter unwanted noise and synthesise other forms of information to create a complete picture.

So, please be mindful of these limitations (whilst in the background I work to reduce them). Think of yourself as a ‘filter room’ when reading these lists. Draw a line through players that are perhaps ‘padding’ in the world’s top squads rather than key influencers. Try to consider factors that can’t easily be seen by the data – like style, mentality or tactical versatility and let’s see if what’s left is ‘actionable intelligence’.

The key point to take away is this: this approach should be treated as a ‘first filter’ of the talent pool. Having identified a long list, additional filters need to be applied that ultimately produce a short-list of potential candidates.

For example, a sensible second pass might be to look at the number of appearances a certain player is making for their team. They might be registered to Barcelona, but are they getting any games? Another consideration might be their ‘style’ of play, mentality or their dominant foot (attributing a playing style isn’t possible using the data I have available).

Using the current squad as a benchmark

By looking at the current squad, we can produce an initial filter of the talent pool that ensures the players being considered are at least ‘good enough’ or better than the players we have available. The diagram below illustrates the current squad as per the metrics generated by the model (click to enlarge): 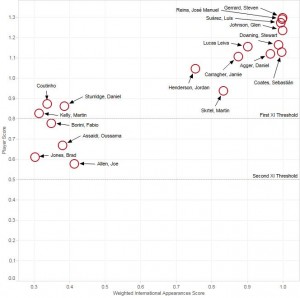 Applying the updated recruitment model to the LFC squad.

Typically, I like to provide links to these dashboards so that you can use them interactively. However, because of a connectivity problem, you’ll need to settle for images (if I solve the problem, I’ll provide the links in the comments section). The diagram below provides an overview of the talent pool that I have identified, which contains 135 potential candidates. These players are:

Each of the potential candidates has been reviewed in the context of a theoretical LFC budget for the role. Using an updated turnover number of £200m, and a slightly revised budgeting model, the colour-coding is as follows: 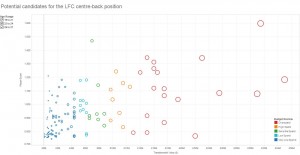 Not ideal as a static image…hopefully I can get an online version made available soon :0)

Obviously, this is hard to read without the online version! The sections that follow provide detailed lists of players grouped by age and sorted in descending order of their ‘Player Score’. It might be an idea to print out these lists and cross-out any player that wouldn’t pass your ‘secondary filters’ (associated with utilisation, style or mentality for example) and see who’s left. Can you unearth a genuine bargain? 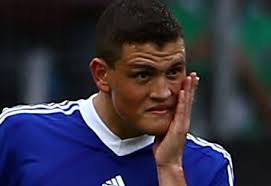 One of the challenges with doing work like this is that people have very strong views on who they would expect to see at the top of each list. Seeing Kyriakos Papdopolous at the top of this list was encouraging on many levels, not least that it would appear the transfer committee and I are continuing to follow very similar logic (so if we go down, at least we’re going down together). Coates continues to score highly with the updated data and refined modelling. Could it be that, perhaps, we’re not getting the best out of him? Alternatively, could the fact that he is a Liverpool player be inflating his position in the model? I suppose Coates is a great example of a player you might want to exclude on the grounds of low ‘utilisation’ (click to enlarge): 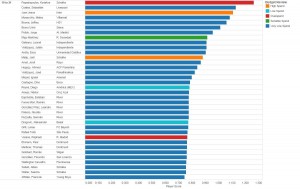 A ‘long list’ of potential central defenders for LFC aged between 19 and 21.

There are a number of players here whose market values appear quite low compared with their ‘Player Scores’. Perhaps the need for European work permits is making an impact? (click to enlarge) 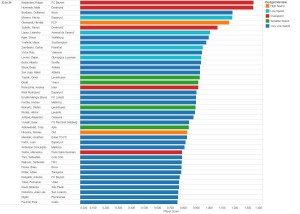 A ‘long list’ of potential central defenders for LFC aged between 22 and 24.

Does the model over-value Raul Albiol or, do Transfermarket.co.uk under-value him? Either way, his situation is perhaps worth further investigation (click to enlarge): 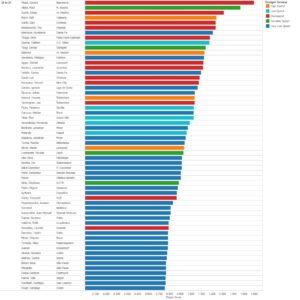 A ‘long list’ of potential central defenders for LFC aged between 25 and 27.

A short piece but hopefully a useful one. If you do take the time to review this list and apply your secondary filters, It would be great to know which players you would ultimately recommend. I’m sensing a long debate in the comments section…