Who’s the Star, the Players or the Team?

Who’s the Star, the Players or the Team? 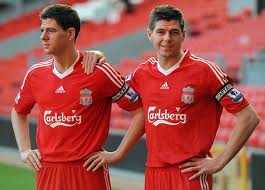 It was Copernicus who, just before his death in 1543, first proposed the ‘Heliocentric’ model.

Simply said, the Sun does not go around the Earth, but the Earth is orbiting the Sun.

We now ‘know’ and ‘understand’ that the Sun does not go around and around the Earth.

We now ‘know’ and ‘understand’ that the Earth is spinning on its axis, and this means the Sun’s appearance and disappearance each day is due to our own movement on a spinning Earth rather than the Sun’s movement.

We also ‘know’ and ‘understand’ that football is a team game, and yet we continue to talk about it as though it was about individual players. We have ‘star’ players. TV coverage has a ‘man of the match’. Newspapers have ‘players ratings’ within games. Fans say ‘he isn’t good enough’. Clubs sell DVDs of ‘Gerrard’s Greatest Goals’.

Just to be completely clear from the start, I am not criticising Gerrard here, just using him as an example to illustrate my point.

It may appear that I am simply stating the obvious in saying that football is a team game, but there are two big issues lurking below the surface of this apparently simple truism. I’ll try to unwrap these issues one by one to reveal what may be hidden from immediate view.

One is the flexibility of roles required in the modern game, and the second is that describing the resulting complexity in terms of the ‘individuals’ can begin to sound ‘crude’ and ‘clumsy’. Using a ‘Playercentric’ model in the modern game will miss the target in the same way as trying to land a man on the moon using the ‘crude’ and ‘clumsy’ ‘Geocentric’ model prior to Copernicus would be doomed to failure.

For example, when we talk about needing a new ‘striker’ or a new ‘centre back’, what are we saying? I’m going to suggest that these requests are too vague, clumsy and ill-defined, meaning they miss the point and lack real value.

Increasingly in modern football, each of the 11 players are expected to fulfil a number of roles. A ‘forward’ can be dropping back, roaming wide, and sitting on the last shoulder. A ‘winger’ can be cutting inside, tracking back, and offering width. A ‘midfielder’ can be a creator, a destroyer, and recycler. A ‘centre-back’ can be central, wide, and bringing the ball out. A ‘wide back’ can be defensive, build-up midfield, and attacking wide. A keeper can be a stopper, a sweeper, and a ‘play-maker’. Saying ‘We need a new left back’ becomes too vague when that can now refer to just one of an increasingly wide range of possible ‘part-time’ roles.

If the club wish to have a range of playing systems available, they will want to have flexible players that can play equally well in a variety of roles and move smoothly and fluidly between them as cohesive components within the team as a whole.

It also means the complexity of what these 11 players can deliver grows enormously. It is no longer 11 ‘full-time’ roles with 10 ‘full-time’ team-mates that they work with giving a total of 55 links within the team of 11. Having the assumed three multiple roles for each player does not just triple the number of connections between them from 55 to 165. If you have 33 (11 x 3) ‘part-time’ roles with 30 (10 x 3) ‘part-time’ roles that they work with, there are now a total of 435 available links within the team of 11. That is eight times more complex. And it is this dramatic increase in the complexity available between the 11 players which allows them to deliver greater efficiency, flexibility and fluidity.

This brings us to the second big issue. I’d suggest that ‘identity’ (what a player ‘is’) may be far too fixed and limited a way to describe players in the modern game. If fixed positions have been replaced by the requirement that players are flexibly and fluidly working together in a highly complex whole, is it still helpful to try to describe what they are doing as a pile of individuals? Should we still be defining these roles in terms of the ‘identity’ of individual players (e.g. ‘striker’, ‘winger’, ‘midfield’)? I’m suggesting it may be more helpful to focus on what happens between the players in this complex web of 435 potential links. I’m asking shouldn’t we be describing them in terms of the ‘relationships’ between players?