Liverpool host Everton on Sunday – 1.30pm kick off UK time – in what will be the 188thMerseyside derby in the league. The Reds are fresh from hammering Newcastle Utd 6-0 – our biggest league win since we thrashed Derby County by the same scoreline back in September 2007 – while Everton’s 1-0 victory over Fulham at Goodison Park was their 11th home win of the season in the league. 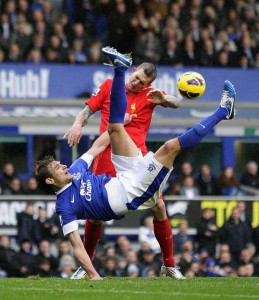 The two sides drew 2-2 in the derby at Goodison Park back in October, with a Leighton Baines own goal and a strike from Luis Suarez putting us 2-0 up before goals from Osman and Naismith leveled matters before half-time. Following that draw, Liverpool occupied 12th place, six points behind the Toffees who sat in 5th. 26 games later and the Reds are five points and one place below Everton who sit in 6th with 59 points.

The corresponding fixture last season saw the Reds claim a 3-0 victory – and subsequently the league double – over Everton, thanks to a Steven Gerrard hat-trick, although the Toffees still managed to finish four points and one place above us.

Premier League record since the two clubs met back in October:

Since the two sides shared the spoils back in October, the Reds have picked up one point more than the Toffees, despite scoring a whopping 20 goals more than Moyes’ men and despite keeping 12 clean sheets compared to Everton’s seven.

Joe Allen (shoulder), Martin Kelly (knee) and Raheem Sterling (thigh) are all ruled out for Liverpool through injury, while Luis Suarez misses game number two of his ten match ban.

Recommend A Friend For Some Free TTT

Who's the Star, the Players or the Team?