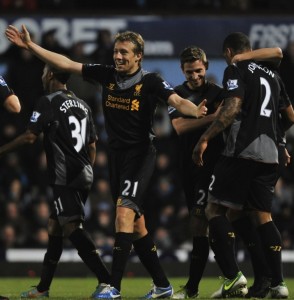 The corresponding fixture in 2010/11 saw the Reds record a 3-0 victory thanks to goals from Glen Johnson, Dirk Kuyt and Maxi, while we also claimed a 3-2 victory at Upton Park back in December in the reverse fixture. In that match, Glen Johnson gave Liverpool the lead before a Mark Noble pen and a Steven Gerrard own goal put the Hammers 2-1 up at half-time. Two goals in thee second-half minutes from Joe Cole (76’) and Jonjo Shelvey (79”) secured all three points for the Reds.

Premier League record since the two clubs met back in December:

West Ham have lost 10 of their 15 away matches in the Premier League this season – only bottom side Reading have lost more with 13. The Hammers’ tally of nine goals scored away from home is the joint worst in the division shared with Stoke.

Fabio Borini (foot), Joe Allen (shoulder) and Martin Kelly (knee) are all ruled out for Liverpool.

George McCartney (knee) and Mark Noble (elbow) are absent through injury for West Ham while Joe Cole (hamstring) is rated as doubtful. Andy Carroll is ineligible.