Liverpool welcome Rafa Benitez back to Anfield for the first time since he was sacked in June 2010 with the visit of Chelsea on Sunday – 4pm kick off UK time. 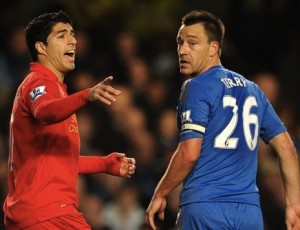 The corresponding fixture last season saw the Reds secure a 4-1 victory courtesy of goals from Henderson, Agger and Shelvey that followed a Michael Essien own goal that gave us the lead, while Ramires struck a consolation for the Blues with the Reds 3-0 up. The two sides shared a 1-1 draw back in November at Stamford Bridge, with Luis Suarez’s second half equaliser cancelling out John Terry’s opener in the first half.

Liverpool have won four of the last five league encounters with Chelsea, with two victories coming at Anfield and two at Stamford Bridge.

Premier League record since the two clubs met back in November:

Chelsea currently sit 3rd in the league with 61 points – 11 points ahead of us in 7th – and 20 points behind league leaders Manchester United. Their tally of eight victories away from home is bettered only by Tottenham who’ve won nine and Man Utd with 12. Rafa Benitez’s side are the second highest scorers in the division with 64 goals scored and have conceded the second fewest with 33.

Liverpool have the third best defensive record at home this season with 14 goals conceded in 16 matches, only Chelsea with 13 goals against them and Man City with 11 goals conceded boast better records. Manchester City are also the only side to have kept more clean sheets than the Reds with 14 compared to our tally of 13, while Chelsea have kept 12 clean sheets.